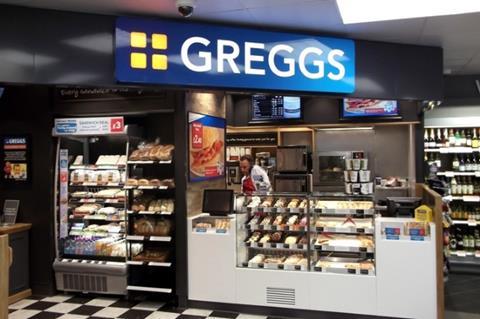 Greggs has unveiled a tie-up with Asda to bring in-store stalls selling the baker’s pastry in five Asda supermarkets from next month. The news follows Greggs deal with Just Eat to offer delivery signed last month as demand fro the baker’s vegan range soars (The Telegraph).

S&P has warned the coronavirus outbreak will knock up to 0.2% points of UK and Eurozone growth this year, as exports and investment to China are stalled. As the Bank of England expects UK growth at 0.8% this year, in S&P’s worst-case scenario the virus could cost the UK a quarter of its annual growth (The Times £).

The virus has put a break on optimism in the market but it may accelerate the tren to move supply chains away from China, argues The Times (£). “Businesses, on finding themselves vulnerable to disruptions in Chinese supply chains, may just have found another reason to shift elsewhere,” writes the newspaper.

Over 50 retailers, including Asda, Greggs and B&Q, have written to the Government demanding a reform of business rates in the next budget (The Telegraph, The Times £). The signatures in the letter coordinated by the BRC include the bosses of leading supermarkets department stores and other big high street names (BBC). The retailers have “ganged up” on the Treasury demanding the reform as they blame business rated for the challenges and closures plaguing the high street (Sky News).

CBD containing products risk being taken off shelves next year if they do not gain regulation. The Food Standards Agency said products had to be registered by March 2021 or they would be pulled, meanwhile despite growing popularity of CBD in drinks, snacks and even pet food, not one product has received approval in the UK yet, raising safety concerns (BBC).

Unilever has vowed to stop marketing its products to children in order to tackle obesity rates. The food giant said it would limit the use of cartoons in its advertisements and on social media it would stop collaborating with influencers appealing to a young crowd (BBC).

Nestle has axed its low-sugar chocolate Milkybar Wowsomes less than two years after launch, due to what the company described as “underwhelming” demand (BBC).

The UK could be taking a £16bn a year hit to its economy by 2050 unless action is taken to protect nature, according to a report by the World Wide Fund for Nature. The study warned the global impact of declining natural assets from forests to fisheries could cost £368bn a year (Sky News).

Heineken’s namesake brand sales rose 8.3% globally in 2019, boosted by a rise in emerging markets. The figures exceeded expectations, pushing the Dutch brewer’s shares up to a record high of EUR104.05 (The Financial Times £). Demand for Heineken’s non-alcoholic lager also contributed to the spike in sales, as the 0.0 drink was rolled out across 57 countries. The group’s sales of no and low alcohol drinks climbed 7.6% to 14.1 million hectolitres - about 2.5 billion pints - though that was only about 6% of its entire sales by volume (Sky News).

Heineken’s performance was the best in a decade, announced just as CEO Jean-François van Boxmeer prepares to leave the business in June (The Times £).

Greencore’s stock was upgraded to a “buy” rating by Berenberg analysts as IGD predicted the food-on-the-go category will rise 4.7% a year over the next five years (The Times £).

The Telegraph argues that Intu’s planned £1bn rights issue might not be enough to save the struggling shopping centre owner, bucking under £5bn debt and depressed valuations.

Jamie Oliver is launching a new restaurant in Dublin, less than a year after the collapse of its UK dining chain, leading to the loss of around 1,000 jobs (The Telegraph).