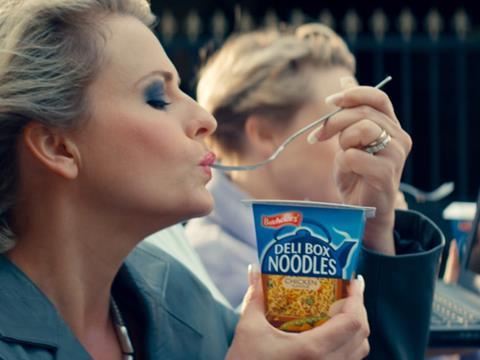 The owner of Mr Kipling, Premier Foods, is under pressure to sell its lucrative Batchelors soup brand amid a spat between the group’s chief executive and its second-largest shareholder (The Daily Mail). The activist investor that has been calling for the chief executive of Mr Kipling and Bisto gravy owner Premier Foods to resign has put extra pressure on the foodmaker by urging it to sell its high-performing Batchelors soup and noodle business (The Financial Times £).

The embattled boss of Mr Kipling owner Premier Foods won the backing of an influential shareholder group on Thursday as the activist investor calling for him to stand aside urged the company to sell off its Batchelors noodles and soups business (The Telegraph). Gavin Darby, chief executive of Premier Foods, has received further support to keep his job after a third advisory firm recommended that shareholders vote to support him (The Times £).

Who will win ‘dessert storm’ at Premier Foods, asks Sky News’ Ian King? Both sides have good arguments in their kitchen cupboard, he writes. “Who will win? The chances are that, with Nissin’s 20% and the shareholder advisory firms behind him, Mr Darby will live to fight another day.” (Sky News)

Sugar left a slightly bitter taste at Associated British Foods after the company said a “substantial reduction” in prices would hit sugar profits this year and in 2019, though the outlook was brightened by stronger trading at retailer Primark (The Financial Times £). A slump in sugar prices since the abolition of European Union quotas last year continued to weight on revenues at Silver Spoon and Primark owner Associated British Foods (The Telegraph).

Sales at Primark have continued to rise and the fashion retailer has lifted its profit forecast despite a tough market where many rivals are shutting shops in an effort to save their business (The Times £). Demand for swimsuits and striped clothing during the heatwave has helped Primark increase sales at its UK shops, bucking the gloom on the high street (The Guardian). It’s not all gloom on the High Street. Primark-owner Associated British Foods is forecasting higher profits from its cut-price fashion chain this year (The Daily Mail).

Profits at craft beer firm Brewdog plunged to less than £1million last year as it splashed out on opening a brewery in America and a vodka and gin distillery. (The Daily Mail)

The UK government is resisting pressure from retailers to reform business rates, saying that it has already made changes and that reforming international corporate taxation is a higher priority. (The Financial Times £)

Business rates are hitting the high street too hard, the Chancellor Philip Hammond has admitted. The Chancellor said he would continue efforts to “find a better way of taxing the digital economy” in order to reduce the tax advantages for online retailers compared to high street stores. (The Telegraph)

It will come as little surprise to the shop assistants losing their jobs as hundreds of shops close across the country, but the high street on course for its worst year in at least a decade (The Times £). High street sales fell for the fifth month in a row in June, according to a survey that suggested bricks and mortar retailers have endured the worst first half year of trading in more than a decade (The Guardian).

Beijing said it would be “forced to make a necessary counterattack” after US tariffs on $34bn (£25.6bn) of Chinese goods came into effect (Sky News). The 25% levy came into effect at midnight Washington time. China has retaliated by imposing a similar 25% tariff on 545 US products, also worth a total of $34bn (The BBC).

2 Sisters’ challenges show the pressure on food suppliers, writes The FT. Price wars between rival supermarkets have forced suppliers to compete for contracts with ever-lower bids, while their costs have risen because of increases in the national minimum wage and falls in the value of the pound. (The Financial Times £)