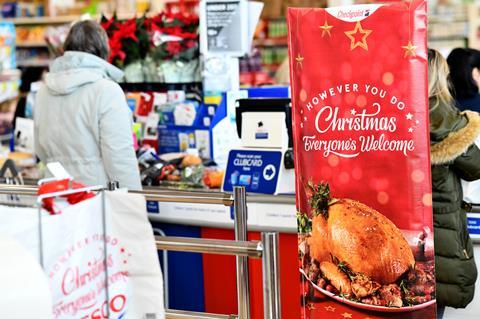 The grocery industry enjoyed a bumper Christmas despite shoppers paring back festive plans as coronavirus restrictions were tightened.

The latest industry figures from Kantar show total grocery market growth of 11.7% to £11.6bn in the four weeks to 27 December, with sales of grocery goods jumping 13.6% among supermarkets and dedicated food retailers.

Kantar’s four-week market figures seen by The Grocer show almost all of the major multiples in double-digit growth during the period.

Tesco, which has yet to officially report its Christmas figures, was the leading big four player, with grocery growth of 14.3%, followed by Morrisons at 14.1% and Sainsbury’s at 13.8%. Asda was the only big four player to lose market share over the period, with growth of 9.8%.

The figures also display starkly contrasting fortunes for the discounters.

While Lidl was among the fastest-growing grocery retailers over the four-week period, with sales growth of 18.8%, rival Aldi saw its market share drop from 6.7% to 6.3% as its sales growth of 6.4% failed to match the wider market.

Iceland was the best performing of the physical retailers, with growth of 19.3%. The market share of both Co-op and M&S remained flat, with sales growth of 11.3% and 9.5% respectively.

Ocado continued to ride the surge of online grocery to post four-week growth of 46.8%, though its market share remains a modest 1.5%.

Overall, Kantar found that digital orders accounted for 12.6% of grocery spend during December, compared with only 7.4% last year.

The strong grocery sales performance pre-dated the December period, with grocery up by 11.4% during the 12 weeks to 27 December.

Fraser McKevitt, head of retail and consumer insight at Kantar, said the industry was continuing to benefit from the shift of the £4bn usually spent on food and drink out of home during Christmas into at-home consumption.

“This year, almost all those meals were eaten at home and retailers stepped up monumentally to meet the surge in demand,” he said.

Similarly, Nielsen found that till sales in the last four weeks ending 26 December grew by 8.4% as almost £12bn was spent at UK supermarkets, with £1.3bn spent online.

This represented a weakening of growth compared with the 10.1% sales growth recorded in the previous month, with Mike Watkins, Nielsen’s UK head of retailer and business Insight suggesting the slowdown represented “the many challenges consumers faced around restrictions and cancelled Christmas plans”.

The Christmas trading statements from supermarkets released so far this year backs up the positive picture for the industry – with Sainsbury’s bringing forwards its trading announcement as its stronger than expected sales had caused it to upgrade its profit expectations.

Sainsbury’s posted like-for-like Christmas sales growth of 9.3%, while its overall third quarter like for like sales were up 8.6% (excluding fuel), with total retail sales up 6.8% and grocery sales up 7.4%.

The supermarket released the figures early as it has raised profit guidance to forecast underlying profit before tax of at least £330m compared to earlier guidance of £270m after forgoing business rates relief of £410m.

Morrisons reported group like-for-like (ex-fuel) sales growth of 9.3% over Christmas and the New Year, while for the first 22 weeks of its second half to 3 January like for like sales were up 8.1%.

Despite lagging the market in Kantar and Nielsen data, Aldi said it enjoyed a “record” Christmas, with a 10.6% year-on-year rise in sales in the four weeks to 24 December boosted by strong demand for beers, wines and spirits, both in store and online.

B&M also reported bumper Christmas trading figures, with a 22.5% jump in constant currency sales for the 13 week period to 26 December 2020 to £1.4bn.