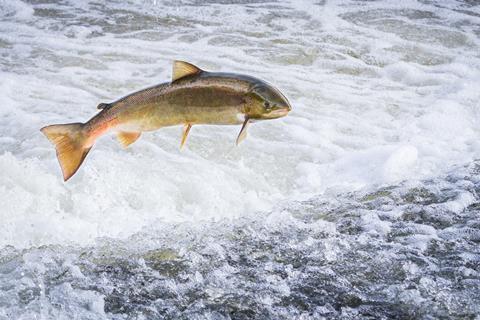 The UK’s salmon population is reaching “crisis point” after wild catches in Scotland fell to their lowest level since records began in 1952, Fisheries Management Scotland has warned.

The total catch – including those released and retained – was 37,196 fish in 2018, some 33% below the ­average during the previous five years.

Though the Scottish government attributed the decline to “a prolonged period of extremely low flows throughout the year” due to hot weather conditions, Fisheries Management Scotland blamed human factors, such as climate change and competition from escaped farmed salmon.

Changes to salmon’s environment and ecosystems had caused significant decline in population, while a the impact of human activity across the northern hemisphere put the species at further risk, said CEO of FMS, Alan Wells.

“Figures for 2018, taken together with those of recent years, confirm this iconic species is now approaching crisis point,” he said.

“Salmon conservation must become a national priority in what is the International Year of the Salmon. Scotland’s Government and regulatory authorities now have a historic opportunity to do everything in their power to safeguard the species,” added Wells.

“We are calling on all regulatory authorities urgently to place a renewed emphasis on the crucial importance of salmon conservation. There are many examples where positive interventions have already helped, but more must be done.”