Confectionery promotions rocket across the mults 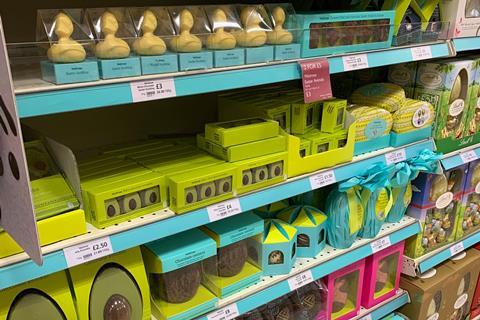 Shoppers are set to get a better deal on Easter eggs this year - with promotions on sweet treats rocketing in the mults.

Ambient confectionery accounted for almost 15% of ­featured space promotions in the major supermarkets last month, with the number of deals in the category up by 18.9% when compared with the same period last year [4 w/e 1 April 2019].

“Ambient confectionery is prominent across retailers, either being number one or two in the most promoted ­sub-­categories in each retailer,” says Assosia director Kay Staniland. “Whilst this is not surprising in the run-up to Easter, the number of offers has increased in some retailers quite significantly.”

Shoppers aren’t necessarily saving more on Easter eggs though, with average savings on ambient confectionery remaining on a par with last year at around 27.6%.

It comes amid a wider increase in promotional activity across the major supermarkets over recent weeks. “All except Sainsbury’s have shown an increase in the number of offers available on featured space promotions vs both last year and last month,” says Staniland. However, most of the mults have slashed average savings on promotions compared with last year, with the exception of Asda.

Save deals are still prominent, but Morrisons, Tesco and Waitrose have all increased x for y promotions compared with last year, which could be a bid to increase volume sales, suggests Staniland.

Morrisons has increased its use of multibuys the most, with x for y deals now accounting for 28.9% of its offers versus 14.2% last year.