Kellogg's goes on the offensive with 60% increase in deals 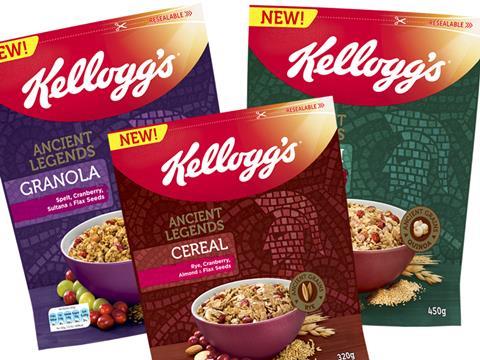 There was good news for cereal lovers this month as Kellogg’s increased its promotions by far more than any brand. Kellogg’s leapt from 10th to fifth place with 162 featured space promotions, a 58.5% month-on-month increase [Assosia 4 w/e 14 February 2016]. It also increased its average savings by 3.6 points to 42.8%, making its products the most deeply discounted by several points.

It comes against a difficult backdrop for the overall breakfast cereals market and as Kellogg’s is looking to boost sales with a raft of NPD, including Ancient Legends - a range made with ancient grains such as barley and spelt.

More than 50% of its promotions offered a half-price discount, a mechanic that set it apart from other brands. The closest the others got was Birds Eye, with 28.7% of its offers at half price. In addition, Kellogg’s added more volume-boosting multibuys, with 14.6% of its deals on an x-for-y mechanic versus 7.9% a year ago and 4.9% of products on bogof compared with none a year ago. Mars was the only other supplier to increase promotions month on month and year on year.

Marching in the other direction were Walkers, McVitie’s and Coca-Cola. Walkers stands out with the biggest reduction year on year, scaling back deals by 49.3%, but it looked to make up for numbers with volume and increased the proportion of bogofs to 14.3% from 7.2%.

Both Mars and Nestlé ran bogof promotions this month but didn’t do so last year.

Cadbury cut back its promotions the most, its 285 deals a 27.1% reduction on last month. Although this was the sharpest reduction of any supplier in the top 10, Cadbury nevertheless remained the most promoted brand. It made a bold step away from a preference for multibuys, which had been out of step with other confectionery suppliers. It offered savings on 85.3% of its deals compared with 54.6% last year, bringing it within a couple of points of Mars and Nestlé’s mix. All five of the most prominent suppliers cut back on featured space promotions month on month.