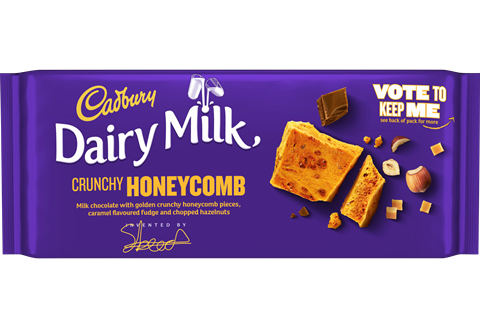 Customers said inclusion of nuts ‘could be clearer’

Mondelez has withdrawn the Crunchy Honeycomb bar from its Cadbury Inventor range of chocolates after shoppers complained its packaging was not clear enough about nuts in the recipe.

The bar, which was developed by a Cadbury fan as part of its annual Cadbury Inventors competition, comprises Dairy Milk chocolate with honeycomb pieces, caramel-flavour fudge and chopped hazelnuts.

A Mondelez spokeswoman said in spite of its efforts to clearly highlight the inclusion of nuts in the product description, ingredient list and visually on pack, a “small number” of consumers had given feedback that the packaging “could be clearer”.

“Following a review we have decided to withdraw the product as a precautionary measure,” she added.

The safety of Mondelez’ consumers was “of paramount importance” and it is currently amending the packaging and adding to the existing descriptors to make it “even clearer” to shoppers that the product contains nuts, said the spokeswoman.

The other two bars in this year’s Inventor competition – Out of the Blueberry and Coconutty – have not been affected.