The Big Interview: FoodCloud CEO Iseult Ward on how to redistribute a million meals per month 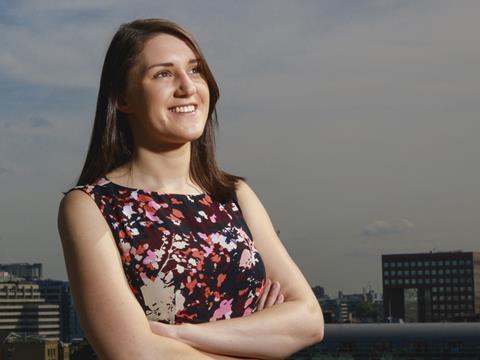 It perhaps wasn’t my wisest idea,” laughs FoodCloud CEO Iseult Ward, as she recalls launching the surplus sharing platform for the first time in 2012 - four weeks ahead of university finals. “But I had it in my head that we had to show the idea would work before I graduated to justify not getting a job.”

The idea was to intercept food waste by connecting businesses binning surplus with charities desperately in need of food. It had been dreamed up by Ward, and her co-founder Aoibheann O’Brien, after a chance meeting at Trinity College in Dublin, where Ward was looking to start a social enterprise and O’Brien was searching for an Irish solution to surplus after time spent volunteering with FareShare in England.

With no equivalent to the charity in Ireland there was “no national infrastructure” for redistribution at the time shy of “one very small food bank in Dublin city centre” says Ward, and the pair spotted a gap. The FareShare model, which sees the organisation store and deliver surplus itself, was out of the question thanks to startup costs of around €350,000. But they were sure they could connect charities to companies directly via technology. “There is a food business and a charity within walking distance of each other. One is throwing away food and the other really needs food,” sums up Ward. “It had to work.”

Appetite for the concept

Working part-time alongside their studies, the pair successfully proved that appetite for the concept was there. Convincing a local farmers’ market to team up with a nearby homeless shelter, they watched as “artisan breads, gourmet sausages and vegetables even I hadn’t seen before” wound their way to former addicts and the homeless rather than the rubbish bin. “It was incredible.”

What did you study at university? Business and economics

Who do you look up to in business? I do really like Richard Branson (to whom Ward pitched in 2016 as part of the Virgin VOOM investment program). You constantly have a million ideas. I have one I’m sticking with but he has somehow managed to do so many

What was it like pitching to him (and supermodel Tyra Banks)? It was very intense. The competition ran over two months, with five different rounds, and the final pitch was incredibly dramatic. There was a spotlight and smoke machines - never mind Richard Branson and Tyra Banks

Do you ever find it tricky being both a young and female CEO? Sometimes I do wish I was walking into a room male, 30 years older and wearing a suit. But there’s never actually been a negative experience for me, it’s all about your own confidence. When we were starting out we probably got more media coverage and I definitely got picked to go to events because they needed diversity, but I was totally delighted with that

Is there any advice you’d share with fellow young entrepreneurs? Get to know your strengths and weaknesses, you should know when to ask for advice and help, and also when to have confidence in yourself

When you have time to relax what do you do? I like to cycle. And Netflix

Rolling out FoodCloud to a wider audience a few months later - on a rudimentary mobile app and while deep in the midst of exam stress - proved far more complex, however. In fact, it flopped.

Having recruited a café, a bakery and a catering company, alongside a handful of charities, the pair watched a single donation pop up on the platform on their first attempt - for courgette and brie soup. One charity CEO drove across Dublin to pick it up. “I rang him afterwards and he said he’d spent 40 minutes driving to pick up enough food to feed about five people. He fed 100 people three times per day. The cost of anyone on his team doing that was not viable.”

Five years on the CEO can laugh about it. After all, we’re chatting in central London where the social enterprise now has a permanent base for their 26 staff as they journey back and forth to manage the 2,492 UK stores now using their tech to redistribute food. Since April, they’ve helped redistribute one million meals per month (a total of 22 million since launch), weighing in at 4,500 tonnes in the past 18 months alone.

That first big fail helped them succeed, Ward insists. That and a few “stars aligning” anyway.

Only months after the first launch, Ward and O’Brien secured a spot on a graduate accelerator program complete with office space, a small salary, two volunteers and mentorship. It was their first lucky break.

They used the time to talk to charities and work out exactly what had gone wrong. “The big learning was that for charities to benefit there had to be good value in the food and it had to be fairly consistent so they could plan around it. Charities plan so far in advance and really, really tightly run their budgets, so getting a random piece of food simply doesn’t work.

“The food also needed to be similar to what they already used, so we moved away from pre-prepared sandwiches and soups to fresh fruit & veg and bakery products. Armed with this we realised supermarkets were going to be the ideal partner. They have a consistent supply of food, it’s good, fresh products - and there’s loads of it.”

As two recent graduates with zero cash and touting an untested idea, their attempts to cold call every supermarket in Ireland (unsurprisingly) proved tough. “Yeah, that was fun,” sighs Ward. “We didn’t have great success getting through.” But then they managed to reach one CSR manager at Tesco that “felt very strongly about food waste” and gave them their second lucky break - the chance to try it out in store.

Their first trial in a single Tesco began in September 2013. “There was a lot of trial and error as we didn’t really understand how they operated in supermarkets,” remembers Ward. “We knew we had to have the right supply of food for the charities but we didn’t know how to make it as easy as possible for the stores. They already have a million things to do and they operate in routines and processes, so it was finding a process that they could do every day.”

“There is a food business and a charity within walking distance. One is throwing away food and the other needs food

To get it right they hung out in Tesco stores. A lot. “The people in the stores were so enthusiastic and you’d just be in a store till 8 or 9pm.” After six months they’d nailed the “sweet spot” for both a supermarket and a charity to identify surplus and collect it, and had expanded to 18 Tesco stores in Ireland, across all formats. Then they got the green light - and €250,000 - to roll out to all 149 stores in Ireland, a cash injection that allowed them to grow from two staff, to six.

And that’s when their third - and biggest - lucky break landed in Ireland. Fresh from being parachuted into Tesco in 2014 amid one of the most chaotic periods in its history, CEO Dave Lewis spotted the FoodCloud app in action on a tour of one Irish store.

“The enthusiasm from colleagues towards the app was incredible and when Dave Lewis came to visit he met one of these very enthusiastic colleagues who went completely off script. He literally bounced up to him and went ‘look what I can do’.” Thankfully, the Tesco boss was “delighted”.

“It was stars aligning again,” says Ward. “All of a sudden Tesco had a new CEO who knew the importance of eliminating food waste from their operations, and we’d just starting working on this programme in Ireland.”

Shortly before Christmas 2014 the email landed in her inbox. Could they roll the concept out to Tesco in the UK? “It was an amazing opportunity, but also quite daunting.”

Not least as they’d spent six months rolling out to 80 stores “with six people running around the country”. Now they had 3,500 extra branches to contend with. They overhauled their tech, which until then was “just fit for purpose, a basic comms tool”, to one sophisticated enough for national rollout and to integrate into Tesco scanners.

Then they set about partnering with FareShare to access its existing network of 2,000+ charities “already engaged with surplus food” in the UK. From 2016, the resulting Community Food Connection scheme was bringing on 100 UK Tesco stores per month. It’s now rolled out to 2,200 and accounts for 20% of donations going through FareShare.

“Charities plan so far in advance and really, really tightly run their budgets, so getting a random piece of food simply doesn’t work

At the same time Ward and her team have introduced their tech to Aldi and Lidl stores in Ireland, and from January began trialling the app with Waitrose in the UK. In October 2016 they also collaborated with the Bia Food Initiative to launch FoodCloud hubs, three warehouses in Ireland where the charity can now begin to store surplus, too.

Manufacturers and suppliers, where 89% of food waste lurks, are next on Ward’s hit list. Why have they been reluctant until now, does she think? “It’s not that they don’t want to do it,” she insists. “It’s just that you need to find the balance for them with the cost benefit. They don’t have the time to dedicate a full person to figuring out what is the process we’re going to set up. It’s about making it easy for them to donate food.

“Nobody says ‘no, I want to throw my food in the bin’. It’s normally ‘I want to do this, but at the moment it’s a challenge.’”

Leveraging technology will be key in tackling the gross levels of global food waste that still exist at every level of the supply chain, she believes. “The food banking sector is amazing, and has done amazing work, but has struggled to leverage new technologies. There are limits when you rely on warehousing, but with tech you get into so many more communities and create local relationships.”

For FareShare that tech has already seen them reach an extra 1,000 towns since working with FoodCloud, up to 1,500 now. The payoff is an infrastructure that captures surplus at every single stage.

“Now, really, whether you’re in the UK or Ireland, a supermarket or supplier, between us and FareShare there is a solution. And we’ve seen it ourselves, there’s so much food in the supply chain that needs to be unlocked and feeding people. Together we’ll be working on it for quite a while.”the big interview Iseult Ward