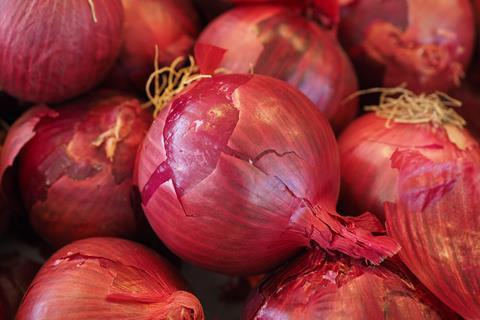 A combination of an exceptionally wet and cold spring, followed by a baking summer, left the UK’s onion harvest down 40%. It forced prices up to £615/tonne in March - a 96.8% increase on the same period last year [Mintec].

Despite retailers relaxing their produce specifications to allow for the smaller crop, suppliers had been forced to start importing up to three months earlier than they would usually to plug the gap, said chairman of the British Onion Producers Association, Tim Elcombe.

The impact of the shortage has started to trickle through into retail pricing, where 27 out of 61 onion SKUs in the mults are now more expensive than they were six months ago, according to data from Edge by Ascential [w/e 3 April 2019].

However, long-term retailer supply contracts have shielded consumers from the worst of ­volatility, with average price rises across ranges in the big four and Waitrose averaging just two pence.

The UK would tend to start importing onions from late May or June, but this year had started importing in earnest in mid-March.

Suppliers were bringing in onions in from as far afield as New Zealand, South Africa, China and the US after European countries - including major onion exporter the Netherlands - suffered similar conditions to the UK, hampering production, added Elcombe.

“It all stems back to this time last year, a lot of growers couldn’t get on the land to plant and had maybe got 30% of their crop in the ground,” he said. “By contrast, this year drilling and planting is pretty much done. Now, the only issue we’re facing is that it’s been a pretty dry 12 months.”