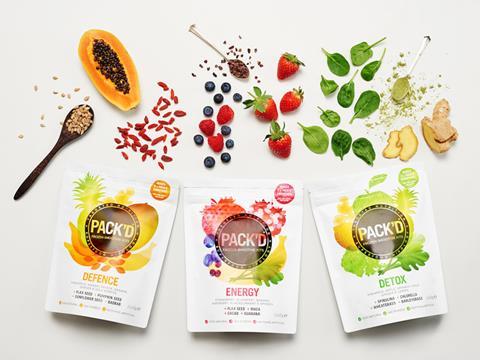 Frozen smoothie kit start-up Pack’d has secured £350,000 from three investors, including the founder of Trek and Nak’d energy bars.

Established by Luke Johnstone and Alex Stewart in 2014, the London business has grown revenues to over £800,000, and is stocked in 750 stores across the UK and Ireland, winning listings with Sainsbury’s, Tesco and Ocado in the past 12 months.

Robert Porter-Smith, the founder of Trek and Nak’d supplier Natural Balance Foods, has joined the brand as a non-executive director following his investment. Jamie Jackson, chairman of online retailer MySale Group, and Paul Bentham, founder of CardSave and Retail Merchant Services Group, also took part in the funding round.

Pack’d plans to use the money to fund NPD and fuel further expansion, with sales projected to hit £7m by 2018/19.

“We founded Pack’d because we were frustrated with sugar flavoured water pretending to be healthy and the hassle of making top-quality homemade smoothies, we haven’t looked back since,” Johnstone said: “I am delighted we have secured additional funding for the business at this exciting phase of our development, but, in particular being able to attract investors of the quality we have; all are experts in retail and are very successful serial entrepreneurs, too. It is a great endorsement for our business. Their input and involvement will be invaluable to the future growth of Pack’d.”

Pack’d’s three-strong range of kits (rsp: £3.50 per 2x140g portioned pack) contain portioned, flash-frozen fruit and veg, as well as a blend of four superfood boosters to add to liquid.”

After securing a mentorship with the Princes Trust, Pack’d sought early funding from Virgin Startups, as well as attracting investors from Chrysalis Records and Planet Organic.

The product first launched in Whole Foods Market in October 2015, and is now available in Tesco, Sainsbury’s, Ocado, Planet Organic and As Nature Intended, as well as wholesaler Costco, foodservice and cafés, such as AMT Coffee nationwide.

Tesco buyer Marianne Aitken added: “We see Pack’d smoothie kits as a great opportunity for customers to make nutrient rich smoothies at home, in less than a minute. We’re proud to be working with a young, Prince’s Trust brand and we’re confident they will be well received in our stores.”