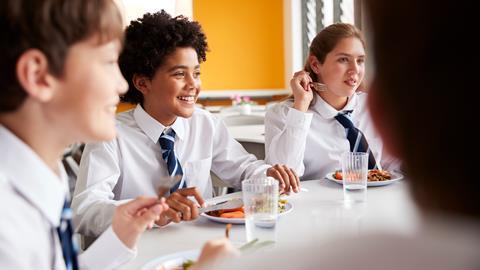 The initial report of the National Food Strategy has been published today. In it, reviewer and Leon founder Henry Dimbleby strongly backs moves announced on Monday in the government’s Obesity Strategy, but says he will be looking at how it could go further by increasing the scope of fiscal measures. Here is how industry figures responded to the report, which also proposes expansion of free school meals, holiday activity and food programmes, and calls on the government to increase the value of Healthy Start vouchers.

“We very much welcome the National Food Strategy Interim report today. In particular, we welcome the recommended measures which will help to increase access and affordability of food for children and families on lower incomes. We have long called on the government to introduce a more holistic approach to helping people to eat well, including targeted measures for those who need it most.

“The report is a considered contribution to the debate about the future of the food and drink supply chain, and we are pleased to see the report’s focus on practical steps to promote recovery and, specifically, jobs.

“Food and drink manufacturing has risen heroically to the challenges of Covid-19. While Covid’s immediate impact is receding, it will have long-term consequences for the operating model and, in some cases, the viability of many food and drink businesses, particularly those in the hospitality industry, as well as those companies that supply that sector. It is therefore essential that any measures we now adopt must facilitate and not hamper recovery.

“While we agree with the more targeted measures set out in the report, we are disappointed to see that Henry has endorsed two of the policies set out in the Government’s obesity strategy – a proposed ‘9pm watershed’ for HFSS advertising and banning retail and online promotions of HFSS products. The Government’s own evidence shows these measures combined will only reduce a child’s calorie consumption by 17 calories per day (1). Such measures will also massively dis-incentivise manufacturers to bring forward reformulated, healthier options since in many cases they will not be able to be advertised or promoted to consumers.

“Our food system is highly successful in providing choice, convenience and value to the public and industry is rightly proud of this. We acknowledge that there are issues that need to be addressed and we are ready to play our part. We look forward to working with Henry Dimbleby, his team and Defra in anticipation of the final National Food Strategy report in the coming months.”

“The National Food Strategy’s first report has made a very significant recommendation at an important time: that we should protect food and farming standards in trade deals, only lowering tariffs on products that meet UK standards. While bans on certain products and methods are still needed, maintaining tariff barriers on sub-standard products has a vital part to play in protecting the nation’s health and environment.

“However, the new Trade and Agriculture Commission is not an appropriate body to define the standards that imports to the UK need to meet. It lacks transparency and representation of environment, consumer and animal welfare groups, and its recommendations are advisory only. This is not an adequate substitute for a safeguard on standards in primary legislation.”

“We are disappointed that Sir Henry Dimbleby has bowed to Government pressure and recommended a dual tariff approach instead of fully protecting food standards post Brexit.

“Allowing a dual tariff approach effectively means that food of a lower quality will still be allowed into the UK and some consumers will be exposed to hormone treated beef, pesticides that are currently banned in the UK and other harmful additives.

“This food may be clearly labelled in shops but this may not be the case in all restaurants and for prepared food. We are pleased to see so many big supermarkets committing to upholding our current high food standards. It’s a shame that the independent review of the food system has not done the same.

“We also do not believe the Trade and Agriculture Commission, which has no public health representation, is the appropriate body to define our core standards.

“However, we very much welcome the recommendation for a new independent commission to be established to assess the impact of all trade agreements, including impacts on food safety, public health and the environment. If the Government adopts this sensible recommendation, this is a big step forward. We also welcome recommendations around free school meals for all those on universal credit.”

“British food producers have shown phenomenal resilience and leadership while working hard to feed the nation amidst the biggest crisis of our lifetime. The recommendations made by the National Food Strategy have come at a time when our nation needs them the most. From putting food on every table in these turbulent times to preparing for the end of the EU exit transition period, our National Food Strategy must ensure that quality of food never diminishes and that every plate is filled with food grown to high British standards.

“As a society we underestimate the need for self-belief and dignity that comes wrapped up in food. From an everyday customer in a supermarket, a patient in hospital, child in school, to someone who needs help from a charity or foodbank, every person in this country should have the privilege of access to affordable food every day.

“The bold ambitions set out in the National Food Strategy’s Report Part One will help us create a food system that supports food dignity; a system where British farmers can carry on taking pride in producing food that people trust, and value; a system that helps British businesses grow and remain economically viable; and a system that creates good jobs and embraces a strong sense of community and social cohesion.

“The National Food Strategy gives us an opportunity to decide how proud we are of our home-grown food, the food values that go into producing it, and how we want to trade with the rest of the world. Now is the time to bolster the heart of Britain’s food supply and secure it for generations to come.”

“The English Organic Forum welcomes part one of Henry Dimbleby’s ambitious National Food Strategy, launched this week. It’s encouraging to see Mr Dimbleby’s ‘food-topia’ vision, which amongst other things, recognises the value of organic farming within a broad-based food strategy supported by investment in R&D that enables innovation to enhance yields and resilience, while also working within natural systems.

“The National Food Strategy Part One refers to Defra’s developing Environmental Land Management policy which aims to pay farmers for the provision of public goods. If the area of organic land in England were to increase to one million hectares, which is approximately three times the current organic land area in England, this would result in a 1.7kt reduction in active pesticide ingredient applications, with an associated 25% increase in biodiversity while simultaneously delivering on numerous other benefits and public goods.

“Organic is widely recognised as a regenerative and sustainable farming system and with its proven delivery of public goods, makes it well suited to help in the delivery of a sustainable National Food Strategy. Organic is backed by annual independent inspections, and its principles and practises are enshrined in law in the UK, Europe and around the world.”