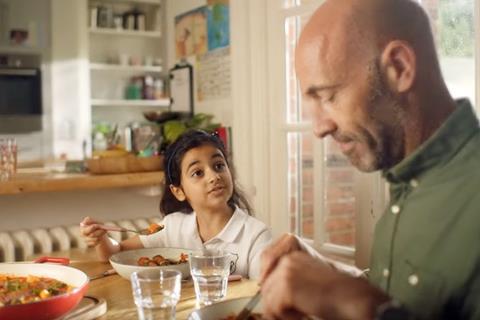 Most children love animals - so of course they’re horrified at the thought of gentle cows and pigs being strung upside down at an abattoir and their throats being slit. If kids say they want to ditch meat, praise them for their integrity - for their courage and compassion - and break out some vegan cookbooks. It’s high time we all stopped misleading kids about the cruelty and suffering behind every glass of cows milk, every beefburger, and every omelette with convenient lies about ‘laughing cows’ and ‘happy eggs’.

A well-planned vegan diet is perfect for children - kids, including my own, thrive on vibrant plant-based foods. But as with any dietary regime, it’s parents’ responsibility to ensure their children are getting all the necessary nutrients. The British Medical Association confirms that people who consume meat and dairy have an increased likelihood of suffering from obesity, coronary heart disease, high blood pressure and cancer, so if anything, parents should be warned against feeding their kids that junk. Consuming plant-based foods forms the foundation of dietary habits that support a lifetime of good health, and that’s why countless conscientious parents are raising healthy children on nutritionally complete, environmentally friendly vegan diets.

The younger generations are the future, and whether Ms Blythman likes it or not, the forecast is plant-based.

Sir, As a mother I agree with Joanna Blythman’s comment in her inflammatory article that “it’s a parent’s job to safeguard their children’s long-term welfare”.

And as an informed vegan businesswoman I also agree with the urging of scientists, the UN and the Committee on Climate Change that we must make changes to what we eat, to a more plant-based diet, for the sake of our children’s future on a catastrophically-threatened planet.

Joanna reveals that she is as passionate about breeding animals in order to kill them to feed ourselves as I and many others are about doing nothing of the sort.

In the past we may have agreed to differ and left it at that.

But the past is not now, nor is it the future. As we know now, the future of this planet is dire, and if we continue to act and eat as we have in the past there may be no future, not for this Earth, nor for its children. The way to safeguard our children’s long-term welfare is not to feed their minds with argument which appears to obfuscate that fact.

Sir, Tesco’s advert is a beautiful portrayal of a nurturing parent who allows his child to make a choice based on facts and compassion, rather than habit and what is perceived as the ‘norm’. We really need a reality check about what we’re eating in this country and about who needs to be careful about the diet they’re feeding to their children.

No one needs meat in their diet - we can obtain all the vital nutrients and vitamins from vegan food. The British Dietetic Association says a vegan diet is suitable for people of all ages, including infants, children and teenagers.

Despite increasingly desperate industry attempts to restrict the growth of veganism, more people than ever are now enjoying living true to their ethical convictions as vegans and this number will only continue to increase.

Sir, I told my mother ‘I didn’t want to eat animals anymore’ when I was seven and was saddened by Joanna Blythman’s recommended response.

Unlike Tesco’s understanding father, mine reacted as Joanna suggests – saying I needed meat to survive and that’s why those animals exist. Their old-fashioned ‘parent knows best’ approach worked for a few years, but at 15 I met a 40-year-old lifelong vegetarian. I haven’t eaten meat in 33 years since that day and have been vegan for 29 years.

As a healthy 48-year-old who does marathons and triathlons, I know without doubt my parents were wrong – about the need to eat meat and to deny me the right to set my own moral compass. Their authoritarian response did not stop me from living according to my beliefs, but it did create a barrier between us that has never been erased.

Tesco’s supportive dad is an encouraging example of progress. My parents reacted based on popular belief in the 70s, but now we know better – we must do better.

Sir: What’s got Joanna Blythman’s goat I wonder? She’s so vehemently anti-vegan that her judgement has become seriously clouded. Blythman makes numerous inaccurate statements thorough her ‘Tesco’s vegan ad, take two’ article. I appreciate that it’s an ‘opinion’ piece, but it will be read with the assumption that the writer is at least referring to some credible sources. Allowing an article full of so many errors to be published is deeply troubling.

Blythman states that humans are unable to be ‘healthy’ or even ‘have babies’ without meat; if you don’t eat meat, she says, then the only alternative is to ‘swallow pills every day’. That is simply not the case. All the world’s major health bodies agree that people can be healthy at all stages of life on a vegan diet – Blythman blithely dismisses the official health guidelines provided by these organisations, I can only assume, simply because she enjoys eating meat.

She suggests that animal agriculture is beneficial to the planet, such that ‘our planet [would be] even hotter’ if we stopped eating meat. The opposite is true. Does she not read the news? Have the substantial IPCC reports from the United Nations slipped by her unnoticed? Livestock farming is responsible more greenhouse gas emissions than all the world’s transport put together. Ditching meat, dairy and eggs is the most effective change an individual can make in reducing their impact on the environment.

Increasing numbers of climate scientists say that we must drastically reduce meat consumption if we are to mitigate the worst effects of the climate emergency. When you consider the urgency with which we need to change our habits for a more sustainable future, and what that means for our children and future generations, it is frankly dangerous to publish such unfounded statements. The article does not cite a single source to support Blythman’s outlandish claims.

The Grocer has given a platform to an incredibly misguided article at a critical time when more and more scientists are urging people to go vegan if we are to have any real hope of curbing the climate crisis.

The serious harm caused by consuming animal products to our health and the planet is far more dangerous than a child not wanting to eat meat. The irony is that Blythman ends by describing the young girl’s desire not to eat animals as ‘modish, ill-informed [and] potentially dangerous’, when the article itself is irresponsible and misleading. I wonder why Blythman cares so much what the million or so vegans in the UK eat? Could it be that she is just a little bit veg-curious – methinks the lady doth protest too much!