Bahlsen Pick Up biscuit bars get 'And then some' campaign 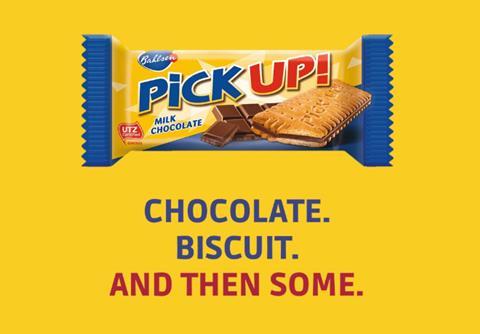 Biscuit brand Bahlsen has launched a £2m campaign for its Pick Up bars.

The push will feature a TV advert airing from today (22 April) for five weeks across channels including ITV, Channel 4 and Sky One. It is set to make its debut during the latest series of Britain’s Got Talent on ITV.

The Pick Up commercial is centred on the message ‘Chocolate. Biscuit. And then some’, intended to portray that the product is more than consumers expect.

Bahlsen predicts the clip will be seen by more than 4.2 million people at least once during its five-week run.

“We are thrilled to share Bahlsen’s most exciting ATL campaign to date - a national TV advert which celebrates that Pick Up really does offer a surprisingly different treat,” said Julien Lacrampe, trade marketing manager at Bahlsen.

“Pick Up is currently overperforming in the chocolate biscuit bars segment and has grown by 23.9% year on year. We want as many people as possible to try and enjoy our delicious biscuits and this fantastic campaign is a significant step on this path.”