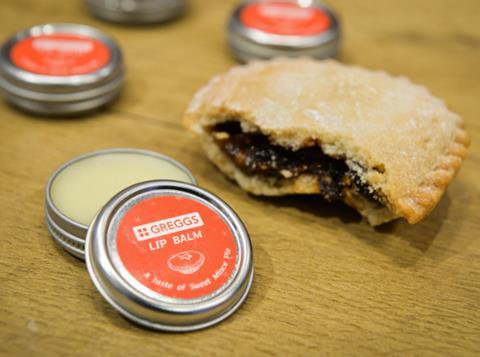 Greggs has launched a brace of lip balms based on two of its Christmas bakery SKUs, and is giving them away.

The two variants are aimed at replicating the taste of Festive Bake – a pasty packed with chicken breast, sage & onion stuffing and sweet-cure bacon in a creamy sage and cranberry sauce – and Sweet Mince Pie, shortcrust pastry filled with sweet mincemeat including Bramley apple and candied lemon peel.

They come in a pocket-friendly tin, 5,000 of which are set to be handed out for free from 10am today (19 December) in nine stores across nine UK cities – Belfast, Birmingham, Cardiff, Glasgow, Leeds, Liverpool, London, Manchester and Newcastle (more details below) – with customers in the capital having been asking for the balm since 6.30am.

The limited edition NPD is aimed at encourage kissing under mistletoe – a holiday ritual never practised by 31% of UK adults, according to Greggs. However, the retailer expected those who maintained the tradition to kiss at least six times from 1 December to 1 January.

“We wanted to bring some fun to the last-minute present dash,” said a Greggs spokesman. “Whether it’s a kiss under the mistletoe or a fun treat for a loved one, our festive flavoured balms will hopefully put a lip-licking smile on anyone’s face.”

Where to get the lip balms