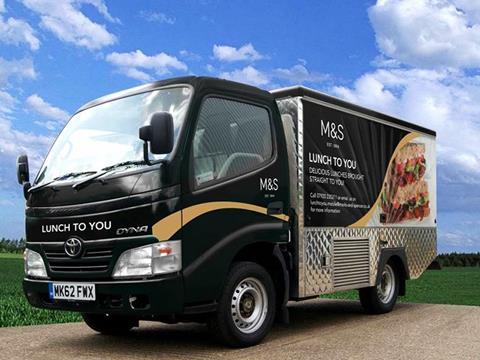 M&S has scrapped its Lunch to You van sales operation which saw food served to business parks.

The service was withdrawn at the end of June in the interests of “simplifying” the business, M&S confirmed.

Lunch to You was launched in 2005 and was previously in partnership Greencore but more recently run through M&S’s distribution network. It served about 100 popular products from M&S’s food on the move range plus fresh soups and ready meals to heat in office microwaves.

In December 2016, M&S said it was aiming to grow the operation from 15 to around 100 vans and roll it out beyond its five locations of Milton Keynes, Northampton, Leicester, Birmingham and Luton.

A spokeswoman said that customers could now use M&S’s click & collect corporate lunch service instead.

“We’re simplifying our business and focusing on M&S Food To Order, which can be collected for free from over a thousand locations and offers customers much more choice and the very best of M&S Food for celebrations, events and meetings,” she said.

Read more: How can M&S rejuvenate its struggling food business?

The Food To Order website offers a range of lunches for meetings and corporate events including sandwich platters and canapés, available for collection from stores two days after ordering.

When M&S was looking for new areas for Lunch to You in 2016, the retailer’s trading director Stuart Forder said: “From our point of view it’s all about creating new channels.”

In May this year, M&S launched a full review of its food business after like-for-like sales fell 0.3% in the year ending 31 March.

The spokeswoman said there were also no plans to roll out one-hour home food deliveries beyond the two stores currently offering them, in London’s Camden and Colliers Wood.

Since launching in Camden last September, the on-demand service has also been trialled in Camberley and Reading.

“There’s no extension to the trial, we’re just carrying on with it,” she said.