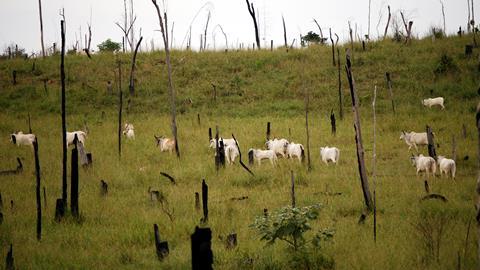 A new investigation has re-ignited calls to ditch Brazilian beef

Brazilian beef is back in the firing line over its alleged links to Amazon deforestation. This time, a joint investigation by the the Bureau of Investigative Journalism, Repórter Brasil, and The Guardian claims to have uncovered photos showing meat giant JBS SA using its own trucks to transport cattle from a farm with land under embargo for deforestation to another farm.

JBS insists the farm in question was not within the embargoed area and the cattle were not bound for its processing plants. But the incident has re-ignited calls for supermarkets to ditch Brazilian beef “while we still have enough of the Amazon left to fight for”.

So what is the Brazilian beef industry doing to tackle deforestation? And is it enough?

Campaigners have been warning of links between Brazilian beef and Amazon destruction for over a decade – and there is no sign of it slowing down.

Deforestation in the Brazilian Amazon exceeded 10,000 sq km last year, according to Brazil’s national space research institute INPE, an area more than six times the size of Greater London. Trase estimates up to 5,800 sq km lost each year is linked to the beef industry.

Yet despite concerns among both industry and public, British imports of Brazilian beef have continued to grow.

The UK imported more than 27,000 tonnes of Brazilian beef between May 2019 and April 2020, according to a leading trade database, up from 25,700 tonnes in the same period two years earlier. In the past year, JBS alone has shipped 11,500 tonnes to the UK.

And like other Brazilian meat processors it insists it is doing its utmost to eliminate deforestation from their supply chains.

JBS says it subjects all of its direct suppliers to “strict socio-environmental monitoring criteria”, which includes the automatic exclusion of any farm involved in deforestation. “We also do not purchase livestock from farmers involved in rural violence or land conflicts, or those who use slave or child labour,” says a spokeswoman.

The meat giant’s monitoring system assesses more than 50,000 potential livestock supplying farms every day and covers more than 450,000 km² (111 million acres), it adds. “To date, we have blocked more than 9,000 cattle supplying farms due to noncompliance with our sustainability criteria,” the spokeswoman says. Its rivals have taken similar steps to ensure direct suppliers are deforestation-free. However, they say it is impossible to monitor indirect suppliers – such as the farms where cattle are born. “There is currently no publicly available official information to enable monitoring of indirect suppliers,” says JBS.

Campaigners fear this lack of traceability opens the door to so-called “cattle laundering”, where farms under embargo for illegal deforestation can send their cattle to ‘clean farms’ that supply major processors.

This is a “huge loophole,” argues Angus MacNeil, MP and chair on the international trade committee. “Brazil needs to clean up its act with regards to cattle traceability or surely nations will have to act in the face of such potential flagrant violations,” he adds.

The British government could soon do just that. Following a recent report by the Global Resource Initiative taskforce on “the challenge of commodity-driven deforestation”, the government is considering what it can do to reduce the UK’s environmental footprint abroad.

“A lot of progress has already been made to make the UK’s supply chains more sustainable, but we know that more needs to be done,” says Zac Goldsmith, international environment minister. “We are looking closely at Global Resource Initiative’s recent independent report… and will set out our formal response later this year.”

The taskforce’s recommendations include due diligence requirements for companies to identify and mitigate environmental risks in their supply chain, and a legally binding target to end deforestation in supply chains by 2030. Labour amendments to the environment bill, due to return to Parliament later in the year, aim to effect the recommendations.

“Whilst the case for businesses and government to invest in sustainable supply chains is clear and increasingly recognised,” says the Global Resource Initiative report, “not all businesses have begun to make this investment.”

Brazil’s meat processors insist they do not condone cattle laundering and are taking action to tackle the issue. JBS, for example, recently introduced a ‘theoretical index’ to estimate a farm’s productivity. If a farm is believed to be exceeding the maximum three cows per hectare per year, it will be investigated.

JBS expects it to have a “significant impact”. But it might not be enough to reassure supermarkets, who are increasingly looking to guarantee their aisles are deforestation-free.

In May, Morrisons, Tesco, Sainsbury’s and Marks & Spencer were among 40 signatories on a letter threatening to boycott Brazilian products if lawmakers passed a measure that would enable further destruction of the Amazon.

The measure expired without being voted upon but has since returned to congress as a bill. Should it be passed, or if the “huge loophole” in Brazil’s traceability is left unaddressed,  the mults may well decide it’s time to ditch Brazilian beef altogether.