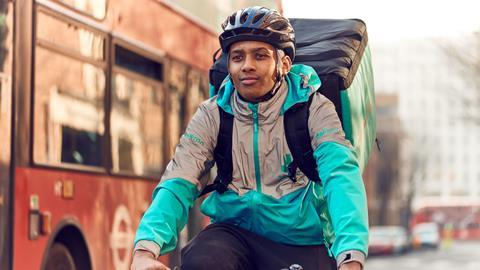 While it won’t “speculate on hypothetical outcomes”, documents released this month reveal that before coronavirus hit, the Competition & Markets Authority had been set to scupper Amazon’s multimillion-dollar investment in Deliveroo.

Despite Amazon abandoning short-lived Deliveroo competitor Amazon Restaurants in the UK in 2018, the authority found “substantial evidence” of the company’s “ongoing interest in the online restaurant platform market”, its report says.

In the convenience grocery space, where Deliveroo has forged partnerships with Co-op, Morrisons, McColl’s and BP forecourt M&S Food, the authority found Amazon too had “ambitious plans”. It saw potential for Amazon to “improve its groceries offer” by developing a “point-to-point delivery network” and compete with Deliveroo by leveraging its Amazon Prime customer base and existing grocery know-how.

These findings, the authority stated, were “likely to make them closer competitors”.

As key investor, the authority saw evidence of “ample opportunities and avenues” for Amazon to exert material influence over Deliveroo’s strategy and therefore the “creation of a relevant merger situation”. Under pressure to do more about big tech ‘killer acquisitions’ of smaller competitors, here was a perfect opportunity to dash the plans of two huge brands to benefit consumers.

But that was before the pandemic. There has now been, as law firm Gibson Dunn puts it: “a u-turn in the CMA’s assessment of this case”.

The closure of many of the Deliveroo platform’s most popular restaurants had caused it a “significant decline in revenues” the CMA heard, and the losses were not being recovered by forays into convenience grocery. And while non-competitor funding streams might have been available when the deal was done in May last year, coronavirus had now ruled those out, the authority found.

According to the CMA, based on evidence from Deliveroo’s financial advisers, the prospect of Amazon’s investment being blocked would see Deliveroo “fail financially”.

“The CMA can only investigate the transaction in front of it,” an authority source said. It decided clearing the deal was the “least detrimental” outcome for competition and consumers.

“The deal is a fairly rare example of the CMA applying ‘failing firm’ principles to clear a transaction that otherwise could raise significant competition concerns,” says Alan Davis, head of the competition, EU and trade group at Pinsent Masons.

“In the absence of the Covid-19 impacts, the outcome might well have been quite different given the CMA’s earlier concerns about the tie-up and its ongoing focus on acquisitions by digital platforms and big tech companies,” he adds.

So what does this ‘least worst’ approach to competition mean for Amazon? And will it prompt a feeding frenzy on failing firms by bigger businesses that can weather the impact of coronavirus?

Amazon has taken a hit from coronavirus too. CEO Jeff Bezos announced last week the company would be spending $4bn - its entire Q2 operating profit - “and perhaps a bit more, on Covid-related expenses getting products to customers and keeping employees safe”.

But the impact of the pandemic forcing the hand of the CMA in provisionally clearing the deal will come as a gift to the e-commerce giant.

The opportunity to potentially tap into Deliveroo’s logistics infrastructure is huge. Amazon argued in its case to the CMA that its grocery offering was “fundamentally different” from Deliveroo’s because Deliveroo offered 30-minute deliveries of small baskets while Amazon offered bigger shops that arrived later the same day or next. But that was before it was revealed Amazon was readying an ‘Ultra Fast Fresh’ service in the UK.

Deliveroo could “dovetail quite nicely” into such an offering, says Miya Knights, co-author of Amazon: How the World’s Most Relentless Retailer will Continue to Revolutionise Commerce. “This could then be seen as part of a strategic move to scale up and ready a near-nationwide rapid grocery delivery capability, and offering that would enable it to take on the UK big four’s current online delivery offerings,” she says.

Amazon could substantially boost grocery market share by increasing delivery speed to 30 minutes, according to analysis of the two companies’ customers, commissioned by the CMA and published last week.

Amazon will also potentially benefit from Deliveroo’s customer base: 20% of Amazon customers have purchased groceries via Deliveroo and 27% of Deliveroo customers have purchased same-day groceries using Amazon Prime. It would be able to “increase its reach, scale and access to customer shopping data, which it continually needs” and gain “strategic influence over a large share of the UK home delivery market” Knights adds.

Opinion: Amazon-Deliveroo risks clearing the way for a feeding frenzy of failing firms

The deal is not without risk. In October, Deliveroo reported a 72% sales hike to £476m but growing losses of £232m. Those sales are now greatly diminished and Deliveroo plans to lay off 15% of its global headcount. The company must “look at how we operate in order to reduce long-term costs”, a spokeswoman said.

“Amazon will inherit all of the challenges Deliveroo is facing. Deliveroo could work out to be an even more costly acquisition than Amazon first anticipated,” Knights says.

The CMA’s approach to the Amazon deal - on which there will be a final decision in June - shows it is willing to “take into account exiting firm scenarios as the counterfactual to a merger” says Gibson Dunn.

The authority late last month refreshed guidance around failing firm claims, saying that sufficiently evidenced arguments should lead to unconditional clearance. This outcome has been rare to date, with only two secured on failing firm grounds since the CMA’s founding.

Damien Ryan, senior associate at Brodies, anticipates there “may now be more cases where the facts suit a failing firm argument”. But the argument and evidence must be “very convincing”.

“The CMA may feel pressure to bow to short-term public policy objectives but it has not lowered the bar for clearing deals that raise competition concerns,” Ryan adds.

There could be plenty of failing firms in coming months - and plenty of buyers. EY found that executive intentions to pursue a merger or acquisition in the next 12 months have barely fallen at all from normal levels during the pandemic: 56% of business chiefs globally still plan to.

Across Europe “it is expected that the crisis will lead to a wave of consolidation, particularly in the more severely impacted sectors,” says Assimakis Komninos of White & Case.

More cases will use the failing firm defence, he adds, leaving the European Commission and European competition authorities to “struggle between pragmatism and ideological orthodoxy”.

In the US, there are already calls for a complete halt on what have been dubbed “predatory” deals. Senator Elizabeth Warren and Representative Alexandria Ocasio-Cortez are seeking to impose a moratorium on mergers and acquisitions involving large companies until smaller companies are back on their feet, through a Pandemic Anti-Monopoly Act.

The CMA says the conditions for the failing firm scenario remain “stringent”.

But Amazon-Deliveroo seems unlikely to be the last deal to test that stringency.