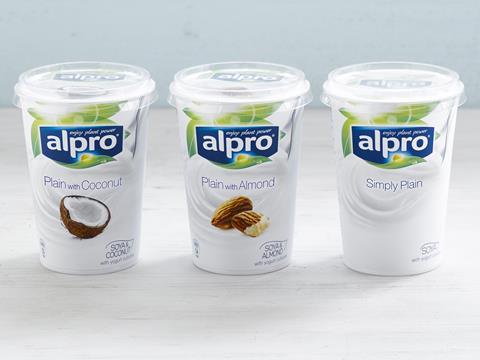 Booming dairy-free brand Alpro is to expand its yoghurt alternative offering with the launch of two new Big Pot ­varieties this month.

The brand is rolling out 500g pots of soya-based Alpro with Almond and Alpro with Coconut to Sainsbury’s stores from 22 January (rsp: £1.79), with a wider rollout to the mults planned for the spring. The launch will be supported with a multimillion-pound media campaign that will run throughout 2015 and consist of TV, PR, online and shopper marketing.

The products formed a “perfect trio” alongside Alpro’s Simply Plain soya alternative to yoghurt, said marketing controller Vicky Upton, adding these varieties were a “natural step” for the brand. “Almond and coconut are on-trend products,” she said.

“When combined with our soya base they create a delicious versatile ingredient, snack or dessert.”

Alpro’s soya-based alternative to milk is now the third-largest brand in liquid milk, with sales jumping 28.3% to just over £74m for the 52 weeks to 11 October 2014 [Nielsen].

Upton added the brand was now looking to make a similar impact in the yoghurt category.