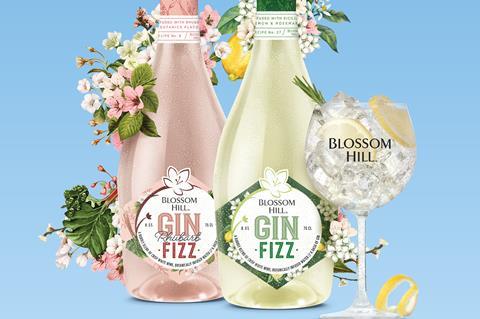 Gin Fizz is designed to be merchandised alongside sparkling wines

Treasury Wine Estates is to launch a new botanical ‘Gin Fizz’ brand for Blossom Hill in an effort to “modernise” the long-standing wine brand.

The drinks are made by blending white wine with ‘botanical-infused water’ and gin, and TWE recommends serving them directly over ice. They are designed to be merchandised in the sparkling wine bay.

Blossom Hill has struggled in the mults over recent years - at the time of The Grocer’s Top Products Survey in December it had been overtaken by posher brands McGuigan and Barefoot in value sales [Nielsen 52 w/e 8 September 2018].

Gin Fizz was “the result of direct customer feedback about what they want to see from the Blossom Hill brand and the wine category in general”, Jakubenko added.

Its launch will be backed by a £1m push, focusing “heavily on the digital space” and working with social media influencers, as well as in-store activations and an experiential campaign, which will see a ‘Gin Fizz Botanical Bus’ attend events throughout the summer.

It marks the second major launch from Treasury since the beginning of the year. In February it unveiled Embrazen, a new wine brand whose concept is centred around ‘female trailblazers’ of the 20th century.

Treasury’s nearest rival, Accolade Wines, has also moved its most mainstream brand, Echo Falls, into gin with a new Rosé Wine & Gin Fusion, which rolled out in February.