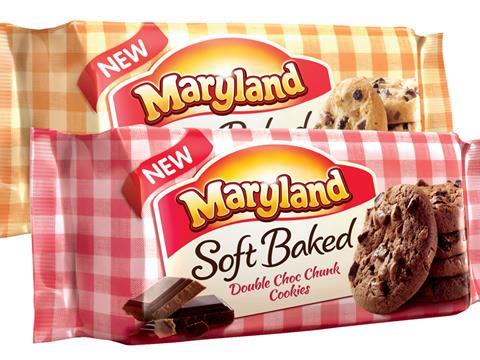 Burton’s Biscuit Co is claiming a first for a mainstream biscuit brand with the launch of soft cookies under the Maryland banner.

The Maryland Soft Baked cookies, which roll out later this month, would become bigger than the £7.5m soft-centred Gooeys launched by Burton’s in 2013, claimed the supplier.

Burton’s had made “a substantial investment” in manufacturing technology to facilitate the launch, said customer category management head David Costello.

“This is the sort of genuine product innovation that will really excite consumers,” he said, adding that research by Buzzback had shown 65% of consumers were likely to buy the product.

“Feedback from retail buyers has been excellent,” he said. “Soft cookies are already popular in in-store bakeries but this is the first time a mainstream brand has offered this sort of product.”

Costello said the decline was primarily a result of less innovation in 2014 than the previous year, when Burton’s launched the Maryland Gooeys brand.