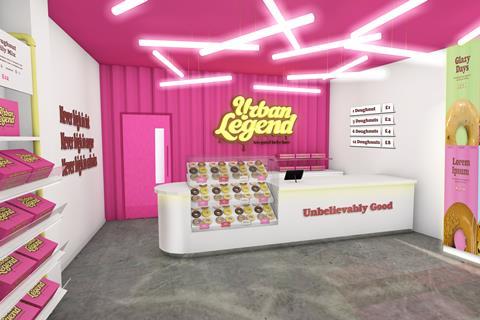 The doughnuts are made with a patented process that allows the dough to be “set” by steam rather than deep fat frying, at a specially built facility

The former CEO of Graze is launching a healthy doughnut brand offering scientifically engineered non-HFSS treats at less than 160 calories per doughnut.

Called Urban Legend, it is the brainchild of Anthony Fletcher, who led Graze for 10 years, prior to which he worked for Innocent.

Fletcher initially self funded the project, enlisting a swathe of scientists to create the brand’s doughnuts, which are non-HFSS, have no red traffic lights under the government labelling scheme, and are billed as containing 50% less sugar and fat than rivals on the market.

They are made with a patented process that allows the dough to be “set” by steam rather than deep fat frying, at a specially built facility.

A micro layer of fat is then deposited on the outside of the treat, designed to introduce “the taste and texture of a deep fat fried product with barely any saturated fat being added” as well as “clever natural flavour combinations that enhance sweetness and cue indulgence” and “alternatives to sugar discovered in melons, pears, roots and leaves”.

The brand will debut next week with the opening of a bricks-and-mortar store in Brighton, with four London stores planned to follow over the coming year, said Fletcher. The doughnuts will also be available through Uber Eats and Deliveroo.

“Bakery is one of the largest categories and it has a clear problem – if you’ve ever made a cake with your kids, you’ve seen the amount of sugar and fat that goes into them,” said Fletcher.

“Consumers are not going to stop indulging but I really believe there is a world of innovation which can solve the problem so people can have their cake and eat it. Plus, I love science.”

Fletcher self-funded the brand at its conception, but had since completed a round of fundraising from “well-known firms” and angel investors, he said.