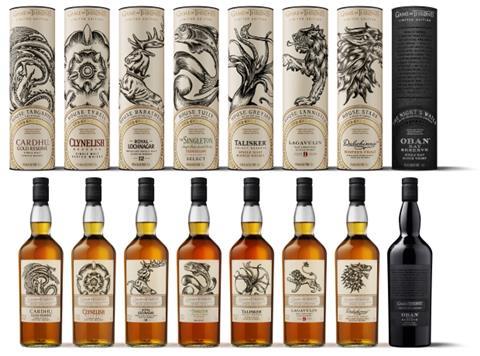 Diageo’s series of Game of Thrones single malt whiskies has been given a UK release date.

The eight-strong range, which launched in the US last year, features drams from Diageo’s distilleries such as Lagavulin, Oban and Singleton.

The packaging is based on the warring houses of Westeros and their mottos from the hit HBO fantasy drama, with each distillery representing a different house.

Each bottle comes in a protective pack that carries the sigil of its respective house and the ‘house words’.

The Lagavulin 9yo single malt, for instance, carries the lion, which represents the show’s villainous House Lannister, and the motto ‘hear me roar’.

They are available to order exclusively through Amazon, and will launch into wider off-trade retail from 19 February (rsp: £38-£65/70cl).

It’s not the first Game of Thrones tie-up launched by the spirits giant - last year saw the launch of White Walker, a limited edition Johnnie Walker blend based on the eponymous monsters from the show.