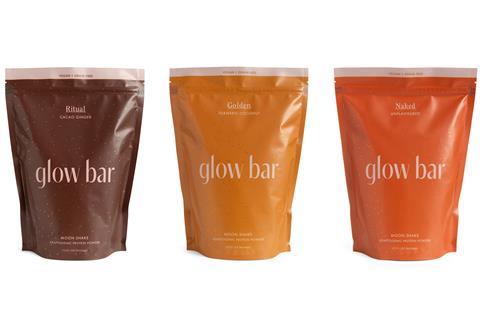 They are: Ritual (Cacao Ginger), Golden (Turmeric Coconut) and Unflavoured. The protein comes from a combination of peas and sacha inchi seed, which Glow Bar said was “a first for the UK”.

The powders are also salt, sugar, stabilizer and grain-free.

They contain a prebiotic fibre claimed to aid digestion and four adaptogenic herbs: Cordyceps, Mucuna pruriens, lion’s mane and ashwagandha, which the brand said can have anti-inflammatory, mood-boosting and anxiety reducing effects.

They have so far rolled out online and at Glow Bar’s retail outlet on Mortimer Street, London. Glow Bar said it was “in talks with large retailers” for listings, but nothing was yet confirmed (rsp: £40/520g-640g).

It also revealed it will launch a ‘Yoni Milk Blend’ made with cacao, shatavari, prebiotics and ginger, designed for women on their periods, onto shelves next year following a trial in its in-store café.