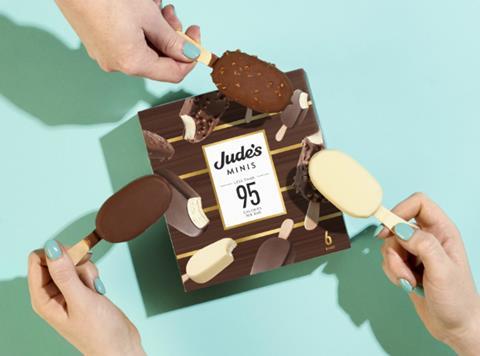 Fast-growing Jude’s is to make its debut in handheld to cash in on the healthier ice cream craze – in a category first, according to the family-run brand.

It will roll out its reduced-calorie Minis on 11 March exclusively to Sainsbury’s in a mixed multipack of Belgian Milk Chocolate, Belgian Milk Chocolate & Almond and Belgian White Chocolate (rsp: £4.50/6x50ml). Each is made with Jude’s vanilla bean ice cream sweetened with stevia and erythritol, and contains no more than 95kcal per serving (190kcals per 100ml).

Minis comes after Jude’s joined its category’s better-for-you ice cream trend in September with the introduction of four lower-calorie tubs promising between 64kcals and 78kcals per 100ml. In the same month, the brand reached a value in grocery of £2.8m, having added 46.7% after the hottest summer in 42 years [Nielsen 52 w/e 8 September 2018].

Last year, lower-calorie ice cream “generated much excitement for consumers” as the likes of Halo Top and Breyers Delights entered the category, said Kantar Worldpanel analyst Isabel Zakers. By early November, the two brands between them had been bought by almost 380,000 households.

“As well as targeting new shoppers, both brands are priced at a premium, which has helped to drive value into the market further,” Zakers added.

In depth: is low cal the new ice cream hero?