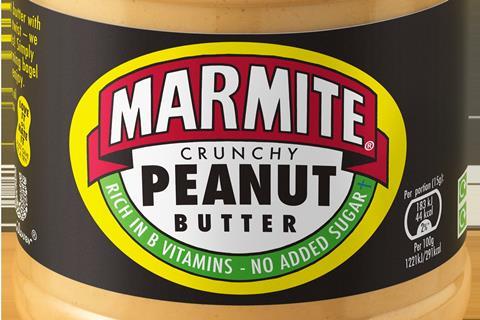 Marmite is muscling into a new area of the spreads market, taking on the likes of Sun-Pat and Whole Earth with the launch of a peanut butter.

The new product from the Unilever brand is a crunchy spread made with no palm oil or added sugar. It comprises about 90% nut butter with about 10% yeast extract – and had been “carefully crafted by the clever boffins in our Marmite lab to appeal to both Marmite fans and peanut butter lovers” said Unilever.

The launch marks a major push by the Anglo-Dutch supplier into the UK’s buoyant nut butter sector, after Marmite made £30.1m last year as the total spreads category added 3.7% of value to become worth £362.2m [Nielsen 52 w/e 8 September 2018].

With 100g providing 580kcals and 28g of protein, Marmite Peanut Butter has more than twice the calories and less protein than its core spread (260kcals and 34g).

Designed to attract new shoppers to peanut butter, there was “no better time to introduce this ground-breaking mash-up” according to Unilever.

It comes after “a huge number” of Marmite lovers shared recipes on social media that mixed the yeast extract with peanut butter, said brand manager Camilla Williamson. “With the total spreads category in growth, it’s the perfect time to unleash this mind-blowing new combo to Marmite fans and really give them something to talk about.”

The launch will be backed by a “tactical” ­PR and social media push.

It comes almost a year after Marmite added a reduced salt variant with at least 25% less salt.