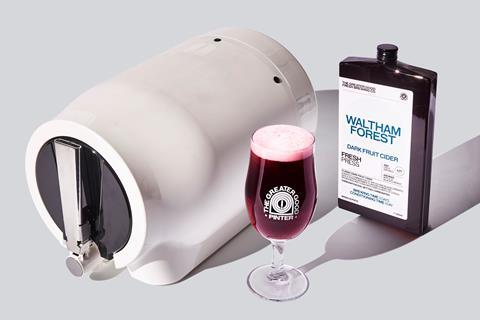 Billed as a “Nespresso for beer”, the Pinter brews, ferments and purifies beer, giving shoppers the opportunity to make fresh craft beer at home.

It had been “years in the making”, according to The Greater Good Brewing Co CEO Ralph Broadbent, and would deliver “a new world of fresh beer into people’s homes”.

The Pinter works using ingredients from the brand’s ‘Pinter Packs’, which should be put into the machine, before placing in the brewing dock and leaving to brew for two to five days and then into the fridge for conditioning.

The Greater Good Brewing Co said that until now it had been “impossible to experience the joy of drinking truly fresh beer at home”, with shoppers having to visit a taproom to get the experience, due to flavour being lost in storage.

The machine launched this month (rsp: £75) with a starter pack containing the machine and two Pinter Packs.

The brand has also rolled out a subscription service called The Fresh Beer Club for its Pinter Packs, which comprise a fresh press, brewing yeast and purifier.

Per pack, they contain 10 pints worth of a bottled mix of premium malt, hops or fruit and water. The subscription is priced at £12 per month.

The ingredients should be put into the Pinter which should then be put in the brewing dock and left to brew for two to five days before placing in the fridge.