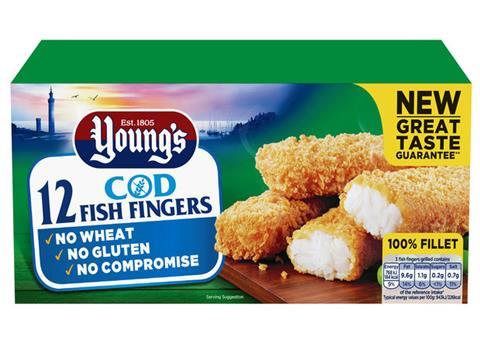 Young’s is targeting shoppers avoiding gluten as a lifestyle choice with new gluten-free variants of its favourite fish fingers.

The brand has launched gluten-free Cod Fish Fingers and Omega 3 Fish Fingers (rsp: £2.50/336g 12-pack), which will be sold in the main freezers alongside the standard variants.

Made with 100% fish fillet and featuring prominent pack designs with the tagline “No Wheat, No Gluten, No Compromise”, the new range will go on sale in Asda stores nationwide on 27 February, before rolling out into other stores in March.

Young’s already has listings for dairy and gluten-free fish fingers in the free-from aisles. But the new range is gluten-free only and is aimed at shoppers who are “beginning to look at avoiding gluten as part of their diet,” rather than just those with allergies, said the brand.

It claimed the gluten-free Omega 3 Fish Fingers were voted tastier than a competitor’s standard fish fingers in a blind taste test.

“We are showing our customers that it is possible to eat gluten-free as part of your everyday lifestyle, without sacrificing any taste or quality. This is especially important for family favourites such as fish fingers,” said Yvonne Adam, marketing director for Young’s.

Young’s hopes that by appealing to the one in six consumers actively avoiding wheat and gluten [Mintel], it can drive further growth in the fish finger category, which is already the largest in frozen fish, worth £128.5m with 53.3% penetration [Kantar Worldpanel 52 w/e 31 January 2016].