Online Grocer 33: Tesco wins as Ocado is second from bottom 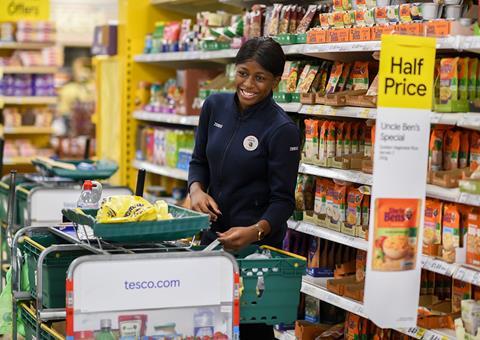 Tesco scored with an impressive 90 points

It was supposed to be a battle between Waitrose, Ocado and its new partner M&S, but the first Online 33 since the pandemic was won by Tesco – with Ocado second from bottom due to availability issues.

Tesco scored with an impressive 90 points, as our shopper in Daventry took just 21 minutes to place her order with the “easy to use” app. And the driver scored a perfect 20/20.

Tesco was also one of three online grocers to have resumed bagless delivery (along with Asda and Sainsbury’s), “a big improvement because over lockdown we ended up with hundreds of plastic bags”.

In its battle with Ocado, the Waitrose shop took 47 minutes, due to a “not intuitive” search engine, which struggled with precise descriptions and misspelled products, but scored full marks for availability and substitutions. as our shopper accepted the suggested alternatives and was happy with the two substitutions on delivery. Our shopper, an asthmatic, also appreciated the driver delivering the goods to a side passage, to be cleaned. But she admitted that as delivery slots became available at rivals she had been using Asda click & collect and Tesco online in recent weeks due to the better search functionality.

Morrisons also scored full marks for availability and substitutions but lost points as the delivery driver was 10 minutes late.

Asda’s navigation was “almost outstanding” said our shopper, her two caveats being the limited number of alternatives the site suggested; and the complex taxonomy and extensive tabs – compensated by fast and intuitive search. However, availability and substitutions weren’t up to scratch (only 66% of the 33 items on the list were actually delivered) and the potatoes were best before 2 September.

Despite reports of cancelled orders, Ocado’s delivery arrived without a hitch, and with no substitutions. However, at the ordering stage, though the order only took 21 minutes, five items were either out of stock or, in the case of the own-label chicken goujons and carbonara sauce, could not be found, suggesting there may be some residual issues with product matching against Waitrose lines. Our shopper suggested that “a bigger sidebar would allow for more items to be shown”. The driver was “helpful” and warned the shopper about which bags were heavy.

In last place, Sainsbury’s order was plagued with delivery issues. The delivery slot did not become available until four days beforehand (shoppers were asked to reserve the slot one week in advance) and the driver arrived 45 minutes early, for which he apologised. He failed to notify our shopper about two missing products that were missing upon delivery, however.