Is Morrisons boxing clever or is Amazon deal suicide? 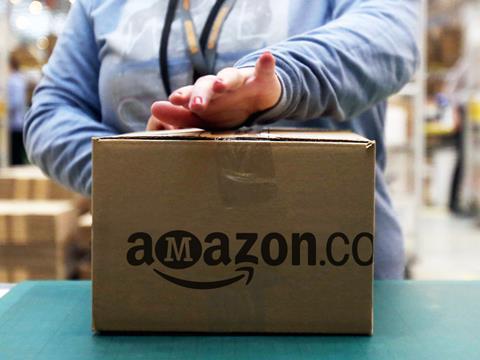 Morrisons took the grocery world by surprise this week with its agreement to supply Amazon. So how does the deal stack up? Is Amazon a perfect fit or a dangerous bedfellow? And what does it all mean for Ocado?

What exactly has been agreed?

So far details are still very sketchy, but what is known is that over the coming months Morrisons will begin a new wholesale service to Amazon. Hundreds of own-label ambient, fresh and frozen lines will become available on Amazon Prime Now and Pantry. While the number of lines may be limited to begin with Morrisons is understood to be expecting this to grow significantly. Unusually for Morrisons Amazon will be deciding which products it wants to stock.

At the same time Morrisons has renegotiated its deal with Ocado, which will involve Morrisons taking space in Ocado’s new customer fulfilment centre in Erith on condition that the latter can deliver a store-picking solution that will allow Morrisons to serve the parts of the country in which it has a strong presence but which Ocado can’t reach.

What will Morrisons get out of the deal?

Morrisons was not Amazon’s only port of call when it came to doing this deal - but Morrisons does appear something of a perfect fit, with a huge manufacturing base it has been struggling to drive full value out of while its core stores business has been in the doldrums. The deal is very investment light and gives it immediate access to a new channel that simply didn’t exist a few months ago. There is also an element of ‘if you can’t beat them, join them’. The Grocer understands that the feeling at Morrisons HQ was that Amazon was coming whatever so it was a much more prudent move to be a part of it than to be fighting against it.

It is also thought the deal has helped Morrisons secure a more favourable deal from Ocado.

Is Amazon a Trojan horse and will Morrison’s rivals’ be cursing the deal?

“Having a credible fresh food supply in the UK will allow Amazon to build scale and expertise and really make an impact on the UK food retail market,” says Bernstein’s Bruno Monteyne, while HSBC’s Dave McCarthy summarises: “Morrisons is effectively helping a serious new competitor overcome some considerable barriers to entry.”

Much of the City’s focus has been on the effect - generally perceived as negative - the deal has on Ocado, given it has been forced to renegotiate its lucrative contract with Morrisons and now faces a pure-play digital giant on its own turf.

But Amazon also presents a fundamental threat to the multiples in an online market where margins remain wafer-thin and delivery costs substantial. Retail Vision’s John Ibbotson believes Amazon’s £79 per year flat fee presents a problem to the big four. “The ramifications of this for the grocery sector are huge,” he says. “Amazon seems content to deliver at a loss indefinitely. By contrast, it costs the big four approximately £20 to make a grocery delivery, for which they can only charge up to £5. For the big four, deliveries have just become permanently loss-making.”

UBS draws a more comforting conclusion, arguing that its higher prices and significantly smaller range mean Amazon still isn’t a significant near-term threat to the grocers. Bernstein’s Monteyne concurs: “The Amazon services do not present an onslaught on the full UK food retail market… [It] is not a one-stop-shop to get a weekly hassle out of the way.”

“Amazon seems content to deliver at a loss indefinitely. By contrast, it costs the big four approximately £20 to make a grocery delivery, for which they can only charge up to £5”

One more near-term impact may be intensifying Sainsbury’s desire to get the Argos deal over the line. Amazon may not yet be going toe-to-toe with the grocers in the UK, but it is signposting its intention to become a full-service delivery player - an evolution the mults are struggling to pull off. Similarly Morrisons plugs gaps in its own offer and can draw on a partnership with the world’s most powerful non-food online retailer. “The announcement increases the likelihood of a firm, higher bid for Home Retail,” says Credit Suisse. “What is unclear is whether [it] prompts Tesco or Asda to enter the competition [and] both have deeper pockets.”

Just how significant is this move in terms of Amazon’s ability to dominate UK grocery?

It “seals the deal for Amazon’s entry into the UK fresh food market,” says Jonathan Buxton, partner and head of consumer at Cavendish Corporate Finance. “It’s the final link in the chain for Amazon to take on the big four by delivering a full grocery offer.”

As well as range, it offers Amazon “national scale” says David Jinks, head of consumer research at ParcelHero. “It means Amazon can significantly increase the availability of its Prime Now food delivery service and its Amazon Pantry service. Amazon needed a way of ensuring one-hour delivery times on groceries beyond major cities - and with this move it has succeeded.”

Amazon’s move also threatens to take out “the immediate loser”, Ocado, adds Jonathan Buxton, partner and head of consumer at Cavendish Corporate Finance. “Ocado will bear the brunt of this new threat to its core offering. Shares trading down more than 9% the morning the deal was announced betray significant concern at how the home-grown online grocer will be able to compete with the might of Amazon.”

“Stores, rather than online, will continue to dominate grocery spending for the foreseeable future”

Bryan Roberts, global insight director at TCC, says Amazon has a “formidable record in driving prices down and creating a pattern of incremental spending and sense of loyalty among shoppers”. However, he adds that while the implications are “clearly huge” for the rest of the grocery market, “a physical environment full of smells, tastes and sights where shoppers can handle each banana to choose the ripest or study every joint of meat to pick the most tender is just one reason why stores, rather than online, will continue to dominate grocery spending for the foreseeable future.” And retail analyst Chris Field believes Amazon will “never dominate the UK grocery market. What may happen is grocers who are making no profit selling food online may call time on their own logistics and delivery networks and start using Amazon’s. But Amazon’s cut of the deal may simply be too much for grocers to stomach, all of which reminds us that making money in grocery these days is tough.”

What does the City make of the deal?

The market’s verdict on Monday was decisive. Morrisons shares broke through the 200p barrier on Tuesday and the supermarket is likely to be readmitted to the FTSE 100 at the first opportunity. Conversely Ocado’s share price plunged almost 8% to 260p, wiping out gains made in late February that were largely driven by rumours Amazon’s search for a UK partner would lead it to Ocado’s door. Ocado had hit a year-long low of 226.8p on 9 February on the City’s frustration at the lack of progress it was making to pen any international partnerships. Perhaps, the rumour went, Ocado was keeping its powder dry because it was in talks with a bigger fish than a conventional international retailer? The Amazon/Morrisons tie-up seems to have put an end to that train of thought and the shares have tanked as a result.

The City took a more cautious approach to the UK’s other two listed supermarkets, largely rejecting the view that Amazon’s UK entry was an apocalyptic event for the big four. Tesco fell 2% to 180.4p as the City pondered whether Morrisons had stolen a march on its big four rivals. Sainsbury’s also spent most of Monday in the red, but rallied in the afternoon to end with its head back above water and subsequent gains on Tuesday and Wednesday left its price almost 4% up since the announcement at 262.1p. Tesco had staged a mini-recovery to 182.6p by Wednesday morning.

Questions were also raised about whether Morrisons got the better of the online grocer in talks to grow the Morrisons.com grocery business. The pair reached an agreement in principle for Morrisons to take space at the new CFC in South East London, due to go live by the end of 2017, and for Ocado to provide a stock-pick service for heartland areas currently out of reach of the Midlands CFC in Dordon.

Long-time Ocado critic (and Morrisons broker) Clive Black says the market may take a “dim view of the renegotiation” and Morrisons’ condition the deal depends on achieving profitable growth online was “a nice way to put pressure on this partnership”, adds Monteyne.

It also seems to go against the Ocado philosophy that store picking can’t compete with its more cost-effective centralised model. However, a retail analyst source points out that despite the central pick model being the best one for the majority of the country it can’t cover places like the Scottish Highlands or the North East of England, which is what Morrisons wants.

“Ocado has a strong hand to play,” he says. “Morrisons will outgrow their capacity at CFC 2, which doesn’t leave them with many options after they missed their window of opportunity to exercise the right to capacity at Andover and Erith, and with 23 years to run on the contract. Ocado are not compelled to provide a service for them outside Dordon, so Steiner may have used that fact to move Morrisons on to the Ocado smart platform model of lower upfront capital and annualised fees.”

John Kershaw of Exane BNP Paribas adds the renegotiation has more relevance for potential international partners. “The hybrid CFC and store pick model is clearly the sort they will end up doing overseas so this adds another string to the Ocado bow.”

Ocado CEO Tim Steiner made the same argument on Monday calling the potential new arrangement “win win”. “It demonstrates Ocado has the technology and knowhow to help partners grow their online businesses rapidly and successfully,” he added.

Despite initial reaction to an Amazon launch being negative for Ocado it may well spur international grocers to sign up to its platform in a defensive play. Stewart McGuire of Credit Suisse says: [The Amazon deal] will serve notice to CEOs and CFOs globally that while signing on to Ocado’s smart platform is complicated, waiting until Amazon decides to launch in your home territory is a lot more worrying.”