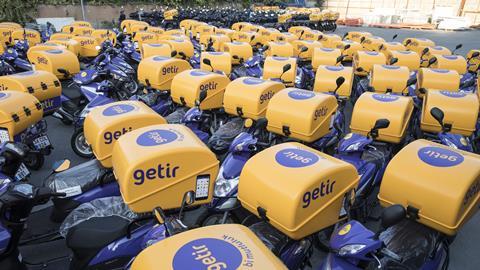 What will Getir’s 10-minute delivery mean for UK grocery market?

Getir, already successful in Turkey, is taking on the likes of Deliveroo – as well as supermarkets and c-stores – with its super-fast fulfilment

Last week a new grocery player hit the capital, promising food delivery in a timeframe that makes even Deliveroo’s 30-minute target sound sluggish. With Getir, people in London zones one and two can order from a range of 1,500 SKUs, for arrival at their door within 10 minutes.

While that may seem ambitious, Getir has already proven the model in Turkey, where it is the biggest rapid grocery player. It is also one of the country’s most valuable startups, following a $128m raise last month.

It is not the only firm slicing precious minutes off what used to be considered rapid delivery. Weezy is a similar service competing in the capital with a 15-minute delivery promise. Unlike Deliveroo, the new players are not just order pickers and couriers but also retailers, with their own dark stores.

So, how are they achieving such speed? Is there a need for it? And how big a threat does Getir pose to Deliveroo’s grocery play, convenience stores and supermarkets?

“Ten minutes is now. When you’re hungry you’re hungry now. It’s an immediate need. ‘In half an hour’ is not fulfilling that need,” says Turancan Salur, the company’s head of international expansion.

To meet its delivery deadline, Getir has established five distribution sites in London – most of them underneath arches – in areas with high population density. Orders come in, are picked from the dark stores, and sent out on scooters. All that’s needed for a hub is a small space at which lorries can drop off and scooters can park.

The dark store model makes order turnaround faster than courier firms or even supermarkets can hope to achieve. A Deliveroo order from a grocery store must be picked by store staff, sharing the aisles with customers, and have a rider despatched to pick it up. Even Sainsbury’s Chop Chop service – where the whole process is frequently handled in-house – can only promise delivery within an hour. And while Ocado Zoom benefits from automation in its warehouses and direct replenishment from Ocado’s Hatfield CFC, Zoom sites must be larger to accommodate the robotics, limiting feasible locations. Ocado’s Zoom expansion plan has recently been quietly downgraded to “several more” by 2025.

Grocers may be comforted by the knowledge Getir’s coverage relies on scores of new distribution sites, but its expansion plans are bullish. In London, 20 sites are due in coming months.

“After our first year we definitely go to Birmingham, Manchester, Liverpool, Leeds, Leicester,” reveals Salur, whose father, Nazim Salur, is CEO. “All major cities with chaotic traffic and a high-density population are definitely of interest to us.”

It is likely to happen quickly. “We have a saying in our company that speed is our currency so we really do try and do things fast,” Salur adds. Paris, Moscow, Sao Paulo and Mexico City are also in Getir’s sights.

Competitor Weezy is also thinking big. Two fulfilment centres in Lambeth and London Fields are about to open – it has four currently – with 40 more across the UK planned in 2021.

“We have already rapidly expanded our footprint and due to the amazing user growth and customer satisfaction we have seen for the product, significantly increased our ambitions for the UK,” says Weezy co-founder Alec Dent. “We are also soon launching in other countries.”

While a younger demographic is Getir’s primary target – video gamers in particular were called out by Salur – the company is pitching itself at anyone who can’t or won’t give up 15 minutes to go out and shop for food. A huge market, Salur says.

Indeed, the growth in courier company partnerships with many of the mults, discount and convenience chains – though partly prompted by the pandemic-induced strain on online grocery in general – seems to bear this out.

Those partnerships “will remain a firm offering to the market” says Dr Kris Hamer, VP research at Retail Insight. “However, Getir will challenge retailers to offer a greater range through this delivery channel, and it puts pressure on both to speed up fulfilment.”

At present, supermarkets typically have a range on courier platforms of around 1,000 SKUs, 500 fewer than Getir. The delivery fees are also often higher than Getir’s £1.99.

But it is in replacing the physical shopping trip to the nearest convenience store that Getir sees its biggest opportunity.

“Even if you have a convenience store next door, you’ve got to get dressed and go down there. We’re getting that to you in the same time. That’s the service people want,” Salur says.

Salur claims Getir is competing on price with Tesco Express or Sainsbury’s Local. “The prices we’re charging is what you’d pay in store,” he says.

His buying team is getting “good deals” from wholesalers and costs will fall with growth, he adds. Recent appointments like head of buying Neil Franklin and category buying manager Andrew Ayres, both former Ocado buyers, will help.

Where these physical stores still have an edge is on range, says Hamer. “Getir is no doubt a competitor to convenience stores and aims to compete on price with them, but in the average convenience store, over 3,000 lines are stocked,” twice as many as Getir offers, he says. “Customers will still be able to access their local convenience store with ease and this won’t change. This could pose a challenge for firms like Getir once lockdowns end.”

Weezy is taking on the range challenge, offering around 2,000 SKUs including fruit & veg supplied by New Covent Garden Market and “some rather niche” luxury items.

“We also work with local mongers to supply fresh bakery and meat products. And we’re starting to work directly with brands who find Weezy a powerful tool to reach customers,” Dent says.

Undoubtedly, Getir’s bold arrival to these shores will shake up the rapid grocery delivery game, with a “significant” marketing splurge covering digital and out of home planned. Longer-term, “we would like to see an IPO,” Salur tells The Grocer.

It could prompt Deliveroo to open its own grocery micro-fulfilment centres, to speed up operations, as predicted by former Amazon executive Brittain Ladd. “This will allow Deliveroo to pull grocery fulfilment from stores and instead automate fulfilment using their own sites,” he says.

It could also spur supermarkets to roll out their own dark stores to offer rapid delivery, something Sainsbury’s Chop Chop experimented with during the early stages of the pandemic using closed convenience stores in London.

But they may need to act fast – because Getir certainly is.

“We just love the thrill of moving fast. It’s something that makes the company happy,” Salur says. “We have the funding, we have the experience, we’re getting the talent so why not?”