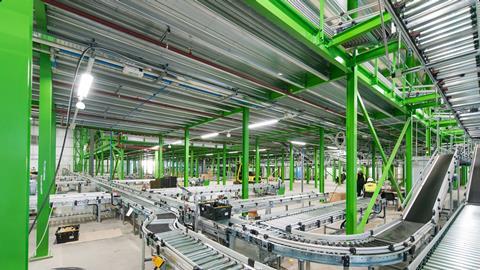 Why are supermarkets scrapping their dark stores?

It seems a strange step to be reducing online capacity right now. Online orders were at a record 15.4% in the four weeks to 21 February (up from 8.7% last year), according to Kantar. Yet Asda announced it was closing its e-commerce CFCs in Dartford and Heston, last week. And Sainsbury’s is following suit, it revealed this week, scrapping its sole ‘dark store’ in Bromley-by-Bow.

It’s doubly strange because in-store picking – the alternative on which Asda and Sainsbury’s will now focus all their efforts – is more costly: it typically results in a negative operating margin per order of 15% vs 11% for a dark store, before delivery charges are added, according to Bain & Co analysis. Furthermore, customers don’t like sharing the aisles with legions of pickers. Three-quarters have noticed the pickers, and a third say it ruins their experience, according to a Fabric survey. And, after all, most people are still shopping in-person So what’s changed?

The short answer: Covid-19 and that same boom in online demand. For all that Ocado opened its first mini-CFC this week – and Waitrose its third CFC next week – the centralised fulfilment model has been shown to be inherently less scalable at pace. In-store picking has enabled Asda, Sainsbury’s and all the supermarkets to increase capacity at far greater speed.

“To support the increasing number of customers who are choosing to shop online and will continue to do so, the supermarket now intends to expand its ‘in-store pick’ model even further,” Asda explained.

Sainsbury’s CEO Simon Roberts added that its own plan “Our new plan puts food first and will create a simpler, nimbler and more efficient business”.

But it’s not just the speed at which capacity can be added: that onward delivery cost accounts for 70% of the fulfilment cost, says Atrato Group fund management MD Steven Noble. So location really counts. Delivering to a densely populated area within a half-hour drive from a supermarket makes sense because “all you need is an increase in demand to effectively utilise your capacity more efficiently” by making more drops per hour, says Noble.

“Our new plan puts food first and will create a simpler, nimbler and more efficient business”

But the same does not necessarily apply when delivering to Dungeness from a central CFC in Dartford, explains Reuben Scriven, senior analyst at Interact Analysis.

“A centralised CFC provides the most efficient economics in terms of cost per pick but a decentralised in-store approach allows for faster delivery and reduces fuel costs.

“Delivery radius and the demand for same-day deliveries are the two key variables when it comes to choosing which approach is best,” he adds.

For now at least, Asda and Sainsbury’s are likely to rely on staff to do the picking. Asda has identified 4,500 new roles in store-based online operations. Sainsbury’s expects the majority of jobs lost from its Bromley CFC to shift to in-store roles. .

But a more automated approach seems certain. By automating a centralised warehouse and adding a small delivery charge, says Bain, online operations are pushed into the black – just. But automate a micro-fulfilment centre and charge for delivery, and there is profit to be made.

Tesco has already shown its hand here: it announced the creation of 25 UFCs in 2019, the first of which will be located within a store in West Bromwich. While Covid has pushed back those plans somewhat, Walmart, for its part, rolled out the first of its own local fulfilment centres, which it describes as a “compact, modular warehouse built within, or added to, a store”, in January. Full of ‘automated bots’ that bring items to staff, it is working with three automation vendors – Alert Innovation, Dematic and Fabric – on the large scale test.

Scriven adds: “optimising an in-store picking approach provides a blueprint to execute an automated micro-fulfilment strategy and given Asda’s recent trials with robotic technologies, I wouldn’t be surprised if Asda rolls out a number of trial MFCs,” he adds.

Indeed, Interact forecasts there will be more than 220 automated MFCs in the UK by 2024. While Tesco will have the largest of in-store rollouts, for now, it seems certain Asda will be involved too. And surely Sainsbury’s too. It’s just a matter of time.