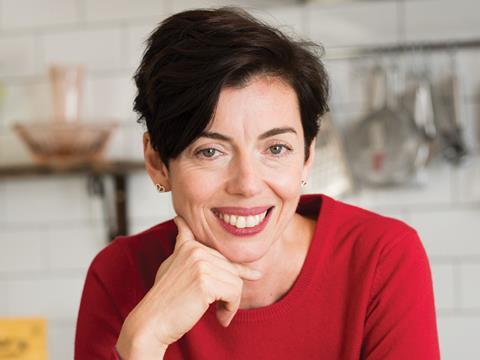 There’s a strict ‘no pooing’ policy for four-legged friends at Lily’s Kitchen’s office. But they still create mess. “You can always see dog hair from my knees down,” says Henrietta Morrison, brand founder and doyen of the posh petfood movement. “People think I have incredibly hairy legs.” Not today, though. She’s wearing dark tights, so it’s hard to see any fur she’s collected from the five pooches roaming among the 68 staff in Hampstead.

Born: Beirut. My father was Lebanese and my mother was British. She was an attendant for BOAC and met him on a layover. I lost them when I was 11 and went to live with my aunt and uncle in Dorset

Marital status: In a civil partnership with Kim; daughter Holly, 21

What did you do before starting Lily’s Kitchen? I started a teddy bear company with friends while studying Arabic at Cambridge. Then I set up a dotcom for the gay community, followed by a diversity publishing company

Career highlight? Meeting the Queen last year at Buckingham Palace. (We won a Queen’s Award for innovation.) She asked my favourite question: “So, what is in your petfood?”

And the lowlight? Not getting our cat range right first time

Best advice received? I remember my mum saying, “Walk in as if you own the place.”

How do you relax? I’m crazy about gardening. Having my hands in the soil keeps me grounded

The eldest is Lily, who just turned 14 - a “grand old age” - the eponymous inspiration for a business whose sales last year leapt 30% to £14.6m, with Morrison picking up a string awards, including Entrepreneur of the Year 2016 at The Grocer’s Gold Awards, along the way.

Morrison took in Lily in 2003 on the advice of her vet brother Bob, despite both being terrified of dogs as children. But at the age of 18 months old, Lily developed sores, her hair started falling out and her ears were itching. No vet - not even Bob - could offer a cure. And she refused to eat.

“She’d run to her bowl and then back away in disgust.” Suspecting the food was the root of her problems, Morrison, a magazine publisher at the time, took to the kitchen. “I guess being a Virgo makes me quite into nutrition,” she says (one of many allusions to spirituality and mysticism).

Lily’s first home-cooked meal was the beginning of her recovery. “In two weeks, the redness went and the sores began to dry up.” Which led Morrison to the belief that “all petfood was really not good for pets. Those pictures of juicy chicken and plump carrots on front of pack are just marketing, and you need a degree in food science to understand the ingredients on the back.”

This was the genesis of Lily’s Kitchen. But Morrison had “no idea about grocery or petfood” so she consulted “everybody” - from vets to homeopaths, even horse whisperers. And then, with a list of recipes prepared (and her publishing business sold), she nearly gave up after every one of the 30 kitchens and factories she visited across Europe thought she was “mad”.

“I said I wanted meat to be the main ingredient. No one had ever done this. By the time I got to apples and blueberries, they were, like, ‘OK, you can go now’. I realised the whole industry was entrenched in the idea that petfood is made with terrible ingredients.”

She finally found her manufacturers after two years of hunting. There were three - all in Europe. And despite warning that squeezing and packing meat would be a costly process she told them “put the money to one side and look at how to create something amazing.”

Her challenge was far from over, however. “I launched in November 2008. It was terrifying, the world was in freefall and one of our cans was 400% more than the next brand on the shelf. I was really worried. If I’d done any marketing research, we wouldn’t be sitting here today.” Indeed pet shops originally told Morrison no one would pay the £2.65 rsp she was proposing. But “they said they’d take a few, and sold them all.” The rest, as they say, is history.

But what about the present, and the future? While sales grew at a dizzying rate last year, Lily’s Kitchen slipped into the red, with an operating profit of £1.8m in 2014/15 turning to a £446,000 last year, as Lily’s invested heavily in growth. That’s meant overhauling its cat range, and adding a Birthday Surprise gift box and a Great British Breakfast tinned meal.

The biggest investment by far, however, has been setting up an export business. Morrison has targeted three countries for international expansion - Italy, Holland and Sweden - on the basis that these countries have similar attitudes to Brits when it comes to pampering their pets. “In the countries we’re in, we want to build a tribe and a brand like we have here.”

But money is also a factor. Lily’s Kitchen receives dozens of calls from retailers around the world enquiring about supply. “It’s wonderful for our vanity but ultimately distracting. We’ve managed to move into these countries, but we’ve been selective because if you do international, it requires a ton of money. You can’t just scatter pallets of petfood across the world.”

Helping to fund this expansion has been US private equity firm L Catterton, which took an undisclosed minority stake in March 2015, while the board of directors also includes ex-Tyrrell’s CEO David Milner.

The capital is also funding Lily’s Kitchen’s first ever marketing campaign. “We never had the money. We now have a bit of money. We’re looking at agencies as we speak.” There are also plans to redesign the dog range, to make it consistent with the cat range rebranding from last year, though she won’t yield to customer pressure to add an eco-unfriendly pouch format.

It’s not all a bed of roses. With Brexit following hot on the heels of European expansion, and manufacturing and half her ingredients coming from Europe, there’s pressure on costs, though she promises that won’t mean a rise in rsps. “There’s bumpiness on the horizon, but I can’t cry over it. I mean, I did for about 48 hours, but we’re going to have to be more adaptable.”

Right on cue, Lily strolls into the room and takes to her bed - possibly to escape the “cuddling” that’s the office norm. “It’s very good for people’s cortisol levels,” says Morrison. “I can understand so much about human nature through my dogs. They teach me empathy, they teach me to slow down. I couldn’t be doing this job if I didn’t have them in my life.”