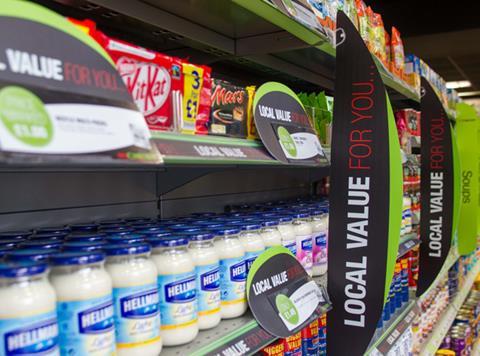 The mults are running more promotions, but the promise of everyday low prices continues to eat into the amount consumers save on each deal, latest data shows.

With the exception of Sainsbury’s (down 10.8% month on month and 13.7% year on year), the mults continued to hike up the number of featured space promotions in store last month [4 w/e 5 June 2016].

Retailers continued to simplify promotions by cutting back on x for y and bogofs while increasing save deals, which were up 5.63% year on year to account for 65% of all promotional activity in the mults.

However, shoppers are not necessarily getting a better deal. Average % savings on featured space promotions are down across the mults month on month, with the exception of Asda, where they remain flat.

Average % savings are also down across most supermarkets compared with last year, except Tesco where they increased 3.2%. What is more, the average starting price for promoted products was higher year on year, with only Morrisons and Tesco seeing a decline in price.

This all points to a potential tightening of the purse strings on promotions, believes Assosia director Kay Staniland. “There is no infinite pot of money in which to reduce everyday prices for some ranges and then continue to offer deep discounts for other products,” she says.

The booze aisles are among the worst hit by this change in retailer strategy, with average % savings on beers, wines and spirits down another 4% year on year to 22%.