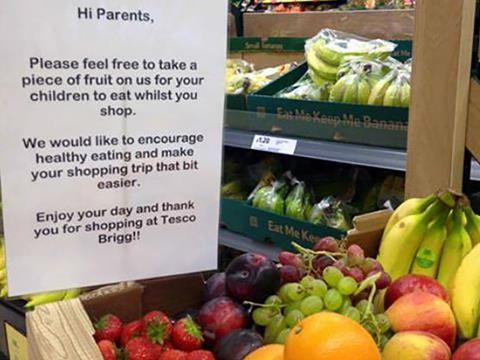 A trial initiative offering free fruit to children at 15 Tesco stores in Glasgow has been adopted by several more store managers across its UK estate.

The Glasgow trial was announced last month to encourage parents to give their children fruit instead of sweets when in store. It followed a similar healthy eating initiative developed by a store manager in Lincolnshire earlier this year.

A number of store managers across England and Wales have now adopted the giveaway, in locations as diverse as Penarth, Dover, Rugby and Colchester, drawing praise from shoppers on social media.

Tesco corporate responsibility director Josh Hardie said it was “great that a number of stores around the country are doing it on their own initiative”.

It follows a similar move by Waitrose, which ran a clementine giveaway for children across all stores between 2 December and 8 December. Tesco said it would make a decision on whether to roll out its free fruit initiative on a wider basis once the Glasgow trial was concluded later this month.