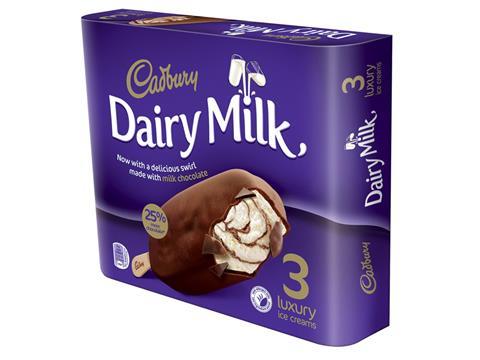 R&R Ice Cream is relaunching the Cadbury Dairy Milk ice cream stick as part of plans to develop its licensed Mondelez product range over the next three years.

Rolling out next month, the new version of the chocolate-covered ice cream contains a swirl of Cadbury Dairy Milk that adds an extra 25% chocolate, said R&R. This gave it a point of difference to other products in indulgent handheld ice cream, added the company, including Unilever’s Magnum.

Packaging has also been revamped, and will feature the new CDM branding introduced by owner Mondelez last year, as well as a new curved box for three-stick multipacks (rsp: £2.99). The relaunch will be backed by a TV and video-on-demand ad campaign throughout April and May.

Yorkshire-based R&R said it was “putting its own stamp” on the product following the acquisition of Lancashire business Fredericks Dairies for £49m last year. As well as Mondelez confectionery including Crunchie and Flake, the deal means R&R now holds the licence to make products under brands including Vimto and Britvic.

CEO Ibrahim Najafi told The Grocer that R&R was currently looking at how it would develop its Mondelez offer over the next three years. Among many ideas being explored are products under the Marvellous Creations sub-brand that has helped Cadbury Dairy Milk confectionery grow by £61.6m in the past year [Nielsen 52 w/e 4 January 2014].

“Securing the Fredericks capability and licences was very important to us,” said Najafi, who became CEO last year when James Lambert stepped down. “Now we have the full basket of licences.”

The Fredericks plant in Skelsdale is now a satellite plant controlled from R&R’s base in Northallerton.