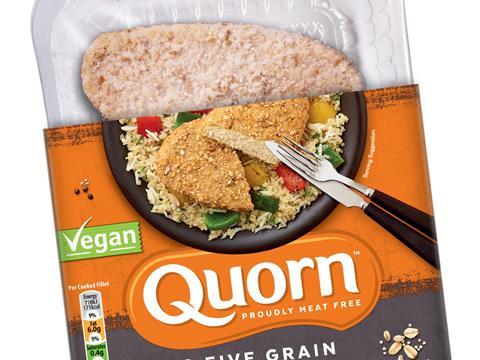 Quorn is back in double-digit growth as demand for meat-free alternatives continues to boom in the UK and overseas.

CEO Kevin Brennan said Quorn, which was acquired by Philippines-headquartered Monde Nissin in 2015 for £550m, had invested significantly in marketing and achieved major distribution gains. He highlighted strong growth in the US, the Nordics and Germany.

Brennan added he expected 2017 to be even stronger as the category continued to win shoppers. Quorn launched a £2.5m push in January starring Olympians Adam Peaty and Kate Richardson-Walsh, marking the end of the brand’s relationship with Sir Mo Farah.

“We’re excited about the continued progress of Quorn and the category,” Brennan said. “The UK has continued to perform well and we are seeing double-digit category growth in both frozen and chilled.

The overall growth trend and UK category growth are accelerating in 2017 so we expected to see even stronger results.”

Cost inflation has hit the business since the Brexit vote, but efficiency gains from investment in the supply chain helped protect margins.

Operating profits slipped 9.8% to £24.8m in the year as a result of “aggressive” investment into the brand to accelerate growth, which Brennan added was “clearly working”.

In July this year, Quorn said it planned to create hundreds of jobs over the next five years thanks to a £150m investment in its Billingham factory. The business made pre-tax operating profits of £13.7m in the first half of 2017 on revenues of £102m.