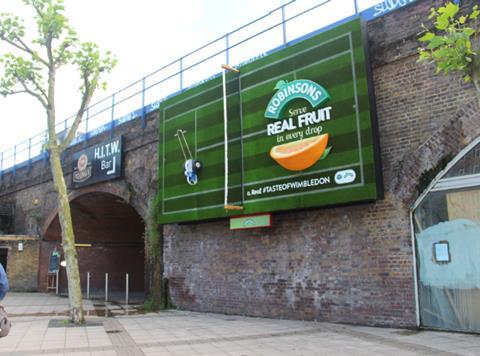 Robinsons is going hi-tech this month to promote its 81-year association with the Wimbledon tennis championships, which begin on Monday (27 June).

As part of a fully integrated campaign, the Britvic soft drinks brand is making use of ‘thermal digital advertising’: outdoor posters that come to life when the weather passes 21 degrees in the North and 24 degrees in the South.

At the Broadgate big screen in the City of London, people will be invited to experience being in an umpire’s chair via a VR headset, while a 3D billboard of a tennis court at Waterloo railway station is ‘bringing the real taste of Wimbledon to life’.

Shoppers will also be able to sample new Robinsons flavours Orange & Peach and Lemon & Pink Grapefruit in stores across the country, and they will be given the chance to win prizes including VIP Wimbledon tickets.

Finally, limited edition tennis ball-style Squash’d packs make their return and feature prominently in a TV ad celebrating the relationship between brand and tennis tournament, which began in 1935 when Lemon Barley Water was created for the players.

“We are very proud of the unique history shared between Robinsons and Wimbledon, one of the most important British sporting events in the calendar,” said Kevin McNair, Robinsons GB marketing director. He added that the brand was “particularly excited about our 3D billboard at Waterloo”.