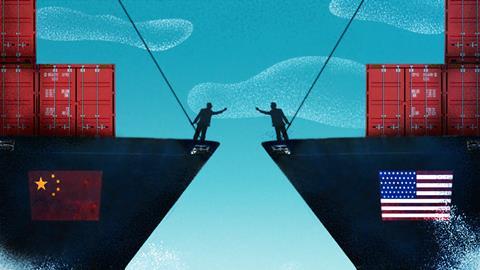 China or US: which is more important for UK food and drink?

Mike Pompeo, US secretary of state, arrived in London on Wednesday for meetings with Boris Johnson amid escalating tensions between western nations and China.

The White House has taken an increasingly aggressive stance against China under Donald Trump, and Pompeo is expected to put further pressure on Johnson to pick a side.

Beijing has already ratcheted up the rhetoric against the UK since it decided to ban Huawei from its 5G network and suspended its extradition treaty with Hong Kong – a move for which the Chinese government said on Tuesday Britain will “bear the consequences”.

If Johnson must ally with either Washington or Beijing, there will be significant knock-on effects for the UK’s international trade. So how do the two markets compare for food and drink?

Food and drink exports to China have boomed in recent years – up almost six-fold since 2010 – and as the world’s fastest growing major economy, that is widely expected to continue. Big steps have been made in easing the regulatory burdens for many sectors, and these efforts have certainly begun to pay dividends.

But compared to the US, it remains relatively small fry. Americans consumed almost £2.4bn of British food and drink products in 2019, more than three times as much as the Chinese.

In fact, US purchases of scotch whisky alone outweigh all food and drink sales to China, with scotch exports to the States tipping £1bn in 2019.

This was in spite of Donald Trump’s decision to impose a punitive tariff regime in October last year in response to the EU’s illegal subsidies to Airbus. It was a devastating move for whisky, with exports down by more than 30% since October, costing the sector more than £200m. Distillers will be hoping Johnson can strike a conciliatory tone with Pompeo over the coming days, as well as in future rounds of trade talks.

Different sectors, however, will of course have different priorities. The meat industry has persistently worked for years to expand their sales to China and their efforts are now finally paying off. Any geopolitical disruptions could set the sector back years.

Meat export volumes have doubled since 2015, with little sign of slowing. Sales have even expanded beyond China’s once typical purchases of offal and fifth quarter products, and increasingly included prime cuts and whole carcases to meet the country’s insatiable demand.

China can be a notoriously difficult market to access due to regulatory requirements. Covid has been a significant setback, first due to China’s lockdown and interrupted logistics networks, while more recently it has scaled back meat imports as a result of outbreaks in slaughterhouses around the world.

Boris Johnson will have some big decisions ahead as he seeks to position Global Britain in a post-Brexit world. But if he is forced to decide on allegiances between the world’s two largest economies, many will inevitably be left disappointed.