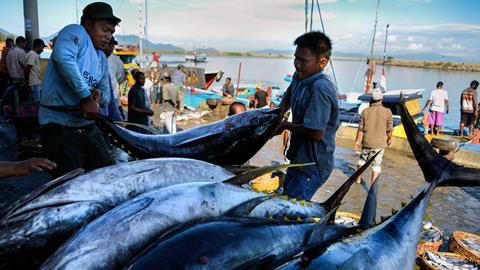 Businesses typically have two options when faced with environmental destruction in their supply chains. Continue buying and advocate for change from the inside, or withdraw from the relationship and thereby induce financial pressure for reform.

This has long been the dilemma facing companies buying Indian Ocean yellowfin tuna, one of the world’s most overfished stocks, now in danger of complete collapse by 2026. Should they stick or go?

Recently there has been something of a rush towards the latter. Tesco said in September it would stop sourcing tuna from the region unless an effective recovery plan was put in place. Last week, food giant Princes said it would cut its sourcing by half compared to 2017 levels. Co-op and M&S have also reaffirmed commitments to protect the stock.

The pledges are an attempt to spur change at an upcoming meeting of the Indian Ocean Tuna Commission (IOTC), the management body responsible for the stock, which has overseen “shocking instances of mismanagement” according to a report released last week by the Blue Marine Foundation.

Many had hoped a recovery plan would emerge at the IOTC’s meeting next month, but the latest draft agenda does not even include an allotted time for discussion.

This has left campaigners concerned that opportunities to save the tuna stock are slipping away, and many therefore welcome the moves of Tesco and Princes, but as the latter’s group director of fish, Neil Bohannon, recognises, “our action alone will not be enough”.

There are no illusions over the fact British companies represent only a small proportion of the market for Indian Ocean tuna and therefore hold limited financial leverage. Tom Pickerell, executive director at the Global Tuna Alliance, is nonetheless hopeful their pressure will force the IOTC to “sit up and take note that the market can’t tolerate a lack of action any longer”.

If there are no signs of change, Pickerell suggests other businesses could quickly follow suit. “If decisions are not made then I would imagine other companies will be reacting and may have to review their sourcing.”

But the strategy is not without risk, particularly to people in the region reliant on the tuna industry. Princes employs 4,000 people at its two Mauritius sites.

Martin Purves, MD at the International Pole and Line Foundation, is therefore urging businesses to avoid a “blanket cull” on Indian Ocean tuna, and instead be “more effective in targeting the culprits”.

Most tuna in the region is caught using purse seine nets, he says, and these are regarded as having the worst impact on fish stocks, hauling tuna, not to mention bycatch, in vaster quantities than so-called ‘one-by-one’ methods. Maldivian skipjack tuna fished using pole and line, in contrast, is MSC-certified after demonstrating sustainability credentials.

“There’s a major role retailers can play in saying I need to stop sourcing from purse seine fisheries unless they do x, y, or z,” says Purves. “We haven’t really seen that type of measure coming from the supply chains.”

With other global fish stocks falling prey to overfishing, Indian Ocean tuna is under ever closer scrutiny. While tuna is the first instance of fish sourcing to see businesses cut supply, the success (or not) of the intervention will likely set a precedent for future courses of action.

The IOTC did not respond to requests for comment.