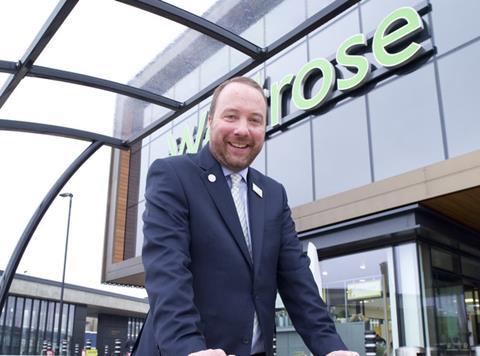 It’s been less than a year since your branch opened. What was setting up a new store like? This was the first time I had opened a store from scratch - we had 120 partners who were all brand new. A lot of customers at the John Lewis store across the road said they wanted a Waitrose, and I think we’ve now become quite a destination store.

How was your first Christmas at this branch? We were absolutely delighted with the performance. The Heston products like the bacon and banana fresh dessert performed particularly well. The other thing we did was in-store taste testings, which were very well received.

How is click & collect doing in your store? I’ve worked for Waitrose for 25 years and I have never seen so much click & collect. I was really impressed with the amount of customers who pre-ordered things like turkeys and I understand there was a real increase across the estate. Partners should be proud of the way they handled it because it went very smoothly.

Your store was on the end of a ram-raiding attack in September, when a cash machine was stolen. Yes, it happened overnight when partners were replenishing stock - it was a very difficult situation handled very well. The police arrived very quickly, they have suspicions as to who did it and give us updates every so often. It did a little bit of damage, but most of it was superficial and we were able to trade the next day. They got away with the ATM but no one was hurt.

Do you have any plans coming up for the store? Waitrose has a lot of ambitions in the foodservice industry, so you can expect that to go at pace over the next year or 18 months. We’ve got a Sushi Daily counter - we were only the fourth store to get one and we weren’t sure whether it would be a success in High Wycombe. But it has been really well received so we’re certainly a branch that could see more foodservice coming in.