So far, the effect of coronavirus on food is a story largely of demand. Shoppers panic buying, retailers racing to fill shelves, and manufacturers striving to ramp up production.

But as the situation develops, the stress will increasingly move to the supply side of the equation.

Border restraints, reductions in workforce, and contracting logistics options could all place increasing strain on supply chains in the coming weeks and months.

This will be especially so abroad, from where the UK sources more than half of its food.

So what is the current state of international supply chains? How are they responding to the challenge? And what does the future hold? 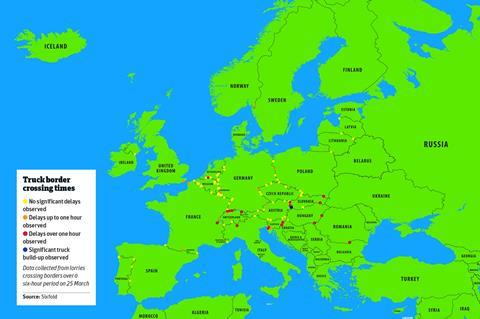 Shoppers are not the only ones acting in extraordinary ways during these unprecedented times. Governments are doing the same.

The free movement of goods through Europe - a fundamental principle of the EU and an essential requirement of just-in-time supply chains - has temporarily ended, with the borders of 18 European countries now closed.

Last week the impacts were severe. When Poland closed its borders to all foreigners, 50km queues developed at its German border, with food lorries among those gridlocked for over 18 hours.

For large manufacturers like Unilever or Mondelez who have big production plants in Poland, the delays roughly cost each truck an additional four days to transport goods to the UK.

Luckily, the most serious ­border issues have now receded. Delays reduced significantly this week as many lorries came off the road, since the need to transport goods such as clothing and events equipment effectively ended. Additionally the passenger cars that swarmed across the continent last week have now largely returned to their home countries.

At the same time, the EU continues to refine its ‘green lanes’ border programme which aims to smooth transit for goods between countries. After initial confusion last week, Ursula von der Leyen, president of the European Commission, introduced new measures on Monday to improve the scheme.

The new guidelines will open up green lanes to all goods to avoid confusion on what is ‘essential’, introduce a 15-minute target for border crossings, suspend freight restrictions, and reduce paperwork for lorry drivers.

“The new guidelines should hopefully really speed up the movement of goods,” says Emily Rees, MD at Trade Strategies.

But although delays are reducing across Europe, goods entering the UK are still having to navigate a bottleneck at Calais, a result of social distancing restrictions halving the capacity of both the Eurotunnel and ferries.

The number of journeys is still running as normal but there is now a two-hour tailback for vehicles waiting to cross, says Heather Wallace, international group manager at the Road Haulage Association.

But delays at the border are only part of the problem.

“There’s a genuine shortage of lorries and that is only going to get harder as we go through the next few weeks,” says Eddie Fleming, director at JEM Fruits, a major fruit importer.

“For every load that needs to be loaded in Spain, you’ve got to phone 10 hauliers. It’s difficult.”

The issue is the same across Europe and has forced many producers to find alternative means to transport goods to the UK.

Many Italian suppliers are now sending goods via shipping containers, resulting in not only higher costs but increasing the travel time from around two days to about a week. For products like pasta and tinned tomatoes, it could make it hard for supermarkets to keep up with demand.

”For every load in Spain, you’ve got to phone 10 hauliers”

Importers like Eddie Fleming are concerned the supply chain could slow down further if more drivers become ill or start to self-isolate, making competition for lorry space even greater.

If that’s the case then retailers have a clear response, says Liam Fassam, director of the Institute for Logistics Intelligence at Northampton University.

“They need to slow down the rates throughput in their supply chain. And the only way they can do that is by stopping people buying stuff,” he says. Supermarkets have already begun to do this by limiting the number of products for each customer.

“It will always come through the pipeline, it’s just going to be delayed,” says Fassam.

The fall in transport availability has had an inevitable impact on price.

Although it’s an issue across Europe, UK importers are paying an additional premium to persuade European hauliers to cross the channel in spite of the financial burden of often returning empty.

Even under normal circumstances, 30% of lorries returning across the channel into France are empty, according to the Department for Transport, with the number now likely to rise further as UK exports diminish.

British importers and retailers must therefore bear the extra cost of a haulier’s empty back-haul journey to Europe.

“On every load, rather than paying £3,000 going one way for example, you’ll now need to pay £5,000. Divide that up over thousands of packs of pasta and it’s not huge but it’s still an extra cost to a business,” says Fassam.

“The supply chain can’t grind to a halt so the logistics price will just keep going up,” he says.

But although burdensome, it is unlikely to cause genuine damage to food supplies entering the UK - not least because, if the prices rise too high, importers can look elsewhere for their goods.

If European food prices rise to the extent that food from the rest of the world is suddenly much more competitive, says Emily Rees, “you might look, depending on the product, to buy internationally rather than from Europe”.

“That’s always been the big question around Brexit. This, in a very different way of course, offers a slight glimpse into that scenario.”

The seriousness of the current situation means the focus on Brexit has quite rightly faded for now. But for years, businesses have prepared for the threat of no-deal and interruptions to cross-Channel supply chains. The Covid-19 outbreak is unexpected and immensely undesirable, but it is by no means insurmountable.