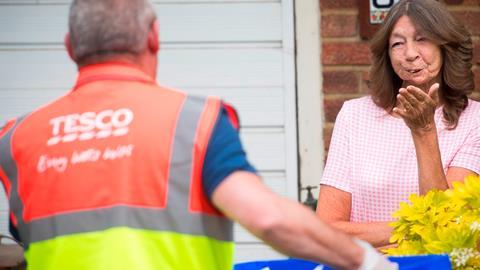 What a year for Tesco. Although all supermarkets upped their game in the wake of Covid-19, Tesco was seen as the best prepared, in a survey of more than 5,000 shoppers carried out exclusively for the Grocer Gold Awards by Nielsen.

Asked which retailer had responded best to the challenge, 21% named Tesco, putting it well ahead of nearest rivals Sainsbury’s (12%), Morrisons (11%) and Aldi (10%). That poll was carried out in September, to reflect a full six months of life under the pandemic.

Tesco has picked up the Britain’s Favourite Supermarket gong for the past five years, but this one will be particularly highly prized because it is testimony to its response to the crisis.

“The fact is that every retailer has responded fantastically, but Tesco stood out,” says Mike Watkins, head of retailer and business insight at Nielsen.

Online was a particularly crucial area, as customers scrambled to get hold of delivery slots during the first lockdown. On this front, Tesco acted quickly – becoming the first UK retailer to fulfil more than a million online grocery orders in a week. 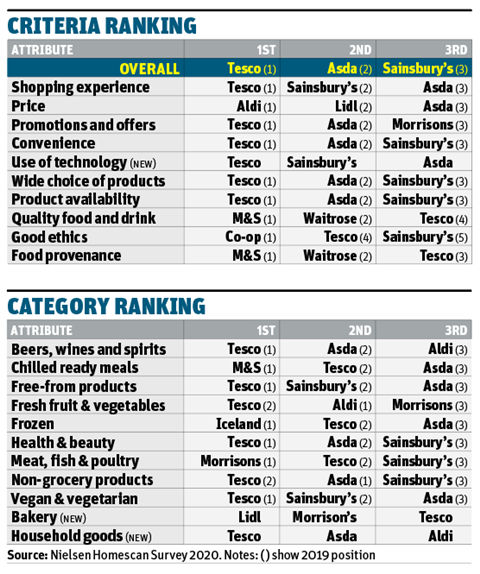 Note: Comparisons against last year should consider that the description for ‘good overall shopping experience’ has been updated to include elements of ‘good customer service’, which ranked 7 last year.

“Tesco is the largest online retailer and they have increased capacity significantly since the pandemic began,” says Watkins, who believes the shift to online is “here to stay”.

“Almost a third of online shoppers are new, they have never done it before,” he says. “In the first stage of the pandemic that was driven by vulnerable shielding people but more recently it’s other groups. Tesco, as well as the other supermarkets, have responded by building capacity in a very short space of time.”

Yet the emphasis on online is not the only major factor in this year’s survey, which found a good overall shopping experience had overtaken price as the most important factor affecting store choice. That was no doubt driven by Covid and the introduction of safety measures.

“Price is obviously still very important, but with the pandemic we have seen it’s about much more than that,” says Watkins. “Other factors like store safety have come into play.”

Here, Tesco rose to the occasion with scan and shop, queue management systems, and strong communication of safety measures to shoppers. Plus, it employed an extra 16,000 staff at one point to maintain safety.

So while Aldi, Lidl and Asda once again were ranked highest on price, Tesco retained its lead on overall shopping experience, in tune with the new norm.

It also came out on top in use of technology, a new metric used for this year’s survey by Nielsen researchers, ahead of Sainsbury’s and Asda. Again, Covid could have played a role here – traffic lights to control store numbers were one of Tesco’s key innovations of the year. It’s also introduced Clubcard Plus, the UK’s first grocery subscription service.

Yet Tesco also made some gains in other more traditional grocery battlegrounds. The poll found it had overtaken Aldi to lead as the retailer with the best fresh fruit & veg offer, and it overtook Asda to become best “non-grocery” provider. It also came third in terms of bakery (a new category), behind Lidl and Morrisons.

Despite having cut deals this year, Tesco also retained its premier position when it came to promos and offers, as well as convenience (see table).

The discounters have been at a disadvantage due to their limited reach, and their market share has declined in the pandemic, but the discounters were still regarded as the most improved retailers in the past 12 months. Aldi was top with 19% of the vote, followed by Lidl (16%) and Morrisons (10%), while Tesco (7%) took fourth place.

Watkins stresses that Tesco’s strong performance should not detract from the efforts of other supermarkets. “There really has been a strong performance across the board this year,” he says. “The industry has responded to the situation and that has been recognised.”

The sentiment was echoed by Tesco UK & Ireland CEO Jason Tarry, for whom the award caps a massive week – Tesco also walked away with The Grocer’s flagship Grocer of the Year Award, among others.

Tarry believes the entire supermarket industry has “stood up amazingly well” to the challenges of Covid.

“It was end of February when we really started to realise what was coming our way,” he said. “But it was Mother’s Day 2020, 22 March, a day I’ll not forget. That was the day of lockdown, and we’d put in place a priority hour for NHS workers and it was very difficult for me and most of my colleagues.

“As a result, public perception of us as an industry is different. We’ve done an amazing job through the pandemic and we did our bit. Tesco has shown it’s at its best when it’s up against it.

“We obviously had a good platform, with more than 3,000 stores, our online operations and the ability to scale up but at the heart of that was our colleagues. They have put our values into action and got on with it.”