German Mozzarella; Polish Gouda; British Camembert – they don’t exactly roll off the tongue, but consumers may have to revise their assumptions about the provenance of their favourite cheeses following the removal of EU milk quotas in 2015.

The end of the quota regime marks a significant turning point for the dairy industry, the effects of which are likely to be felt throughout the sector, not least in Continental cheeses, which are set to become a prime destination for the anticipated excess milk supply. And while consumers may see little difference to the range of products on supermarket shelves, the geographic origin and price of Continental cheese could be affected significantly.

Eurilait MD Howard Newmarch believes cheeses that are not covered by the EU’s PDO and PGI protected food schemes will be in a weaker position if they can be produced cheaper in other countries – provided there is no compromise on quality. He gives the example of mozzarella, which is already produced in Germany to a “very acceptable” quality, as threatening mozzarella from Italy, which has historically been the origin of choice for retailers and consumers. “More expensive milk in Italy has meant that the Italians can’t easily compete on this traditional stronghold,” says Newmarch. “The more consumers are exposed to product of generic origin, the less they will question the provenance.”

“The more consumers are exposed to generic origin, the less they will question the provenance”

Arla’s senior brand manager Kate Richards agrees traditional provenance is becoming less important to consumers, as demonstrated by the rapid growth of British Brie and Camembert in the UK market. “Ultimately, consumers are looking for great tasting cheeses that offer something a bit different from the norm, along with an interesting and credible story,” she says.

Consumers may also have to get used to volatility in prices as liberalisation makes the EU dairy market more responsive to global supply and demand. In the short term, the anticipated increase in production across Europe from the likes of Denmark, the Netherlands, Ireland and Germany is likely to play to the advantage of UK consumers. “With a higher volume of milk you would expect a slightly lower price and therefore a more competitive market,” says Kenneth Axen, MD of Futura Foods UK, which supplies a range of Greek, Cypriot, Italian, Spanish and Northern European cheeses to the UK market. “The market for Continental cheese in Asia is increasing, and with a larger quantity of milk, the suppliers of Continental cheese will be able to supply the European market at the same price level and avoid shortening the European market for cheese.” 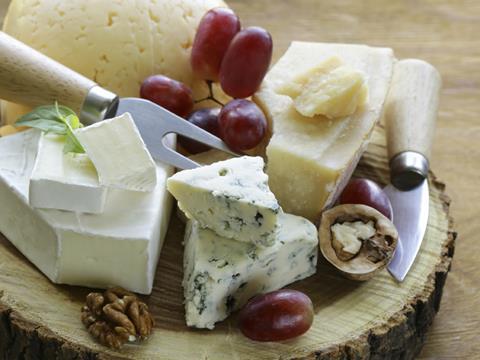 The biggest Continental cheeses remain staples such as Mozzarella, Parmesan, Brie and Edam, according to Axen, although he also reports strong percentage growth for less mainstream cheeses such as Feta, Salad Cheese and Halloumi.

Newmarch cites Halloumi as one to watch. He says cheeses that are succeeding are those that have an application as a meal ingredient, whether central stage or as an accompaniment. Cheeses “that add real punch of flavour” such as Parmesan and Grana Padano also show no signs of slowing down, he adds, and there remains huge potential for growth in Continental cheeses of a “specialist” style as consumption, frequency of purchase and household penetration in the UK are still low.

Meanwhile Camille Mancelle, area export manager for French dairy co-operative Isigny Sainte-Mère, reports growing demand from a small base for innovative cheeses such as Camembert matured with Calvados and speciality products such as Livarot, a soft cheese made from cows milk. Mancelle says exports are a key part of the Isigny Sainte-Mère business, with the UK one of its most important markets, accounting for three to four percent of its total business. One third of The Co-op’s products are exported and by value exports account for 45% of the business. Mancelle anticipates this growing to 55% to 60% following the removal of quotas.

Exactly which cheeses will benefit most from the removal of quotas is hard to predict. Renton doesn’t anticipate brand new Continental cheeses finding their way to the UK but does believe we will see greater availability, more pack size options, more convenience (sliced, grated and portions) and an increase in cheeses with stronger flavour profiles, such as smoked Continental cheeses.

One thing Renton is certain of is that excess milk will find its way into Continental cheeses. “Cheese is a practical outlet for all this increased milk pool in the EU, customers are eating more cheese and Continental cheeses have significant added value.”

Internationally traded cheeses such as Cheddar, Gouda and Mozzarella are likely to benefit most, says Renton, who also cites Danish cheese as gaining in popularity with UK consumers.

One factor holding back the Continental cheese category is the propensity of consumers to only buy into one market segment, thus limiting the frequency of purchase overall within the category, says Arla’s Richards.

Arla is trying to address this with its Castello brand by encouraging consumers to shop across its range of cheeses, which span all three categories (white, blue and hard cheeses). As part of its efforts to widen the appeal of the range, Arla launched a new TV campaign for Castello earlier this year and undertook sampling activity in stores throughout the UK, as well as linking up with food festivals to encourage trial.

With the supply of Continental cheeses set to rise following quota removal, it will become even more imperative for brands such as Castello to add value through marketing and NPD if they are to maintain their position in this ultra-competitive marketplace.