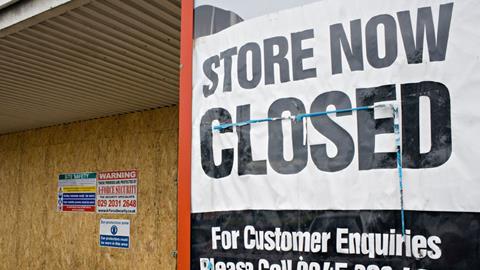 By tying landlords’ hands, the government has stored up a crisis for retail

The government’s latest intervention on rents may be a relief for some retailers, but it doesn’t bode well for the sector.

Retail is already only paying just over a third of its rent bill and accruing debt at a rate of around £1.4bn a quarter, according to the British Property Federation.

If anything, that rate of debt accumulation is likely to rise as a result of the government banning landlords from issuing statutory demands or winding-up orders against retailers unable to pay rent because of the Covid-19 pandemic.

The protection, introduced last week, lasts until 30 June, but could be extended. Legislation is also being introduced banning landlords from taking legal action to recover unpaid rent for the first 90 days. They have been banned since March from evicting commercial tenants for non-rent payment for a period of at least three months.

The government has asked retailers to “pay what they can” – but it has also given them one less reason to do so by tying landlords’ hands. Landlords and retailers had at least been engaging in constructive talks but even that is now less likely “because actually it takes away the incentive for that to happen,” says Melanie Leech, CEO of the British Property Federation.

As a result, it stores up what could become an insurmountable debt for many businesses in an already troubled sector. Lawyers are already warning of a wave of insolvency litigation based on rent debt when lockdown ends and landlords’ leverage is restored.

“The pause on litigation does nothing to resolve issues, and we already see a spike in enquiries about possible legal action following lockdown,” says Matt Pugh, managing partner at property litigation firm Hägen Wolf.

The implications do not stop there, according to Leech. Legislation undermining landlords’ ability to collect rent owed under contract risks turning property investors off retail, spooked by a new layer of political uncertainty on top of an already risky sector.

“If the retail sector has been hit so that those businesses are really struggling, and the investment market’s been really hit so there’s no money to invest in those buildings, the knock-on effect is that retail will not be part of the reinvention of the high street,” she says.

Neither retailers nor landlords want or to expect full rents to be paid while shops are closed. That’s why both the BPF and BRC have called for a ‘furloughed space grant scheme’, whereby the government makes a contribution to rent in proportion to the drop in turnover seen by the retailer.

Under the recommendations, businesses would submit forecasts of their actual and expected drop in turnover for the lockdown period, and their fixed property costs. The government would then meet the costs on a sliding scale. A 40%-60% drop in turnover would see the government pay 25% of the costs, rising to 50% of costs for a 60%-80% drop, 80% for an 80%-99% drop and 100% for businesses not trading at all.

The scheme would help address concerns expressed by landlords that some well-capitalised retailers can now take a “rent holiday”, even though they may still be open in lockdown.

It would save landlords from a cashflow crisis that risks leaving them unable to meet interest repayments. “You may end up in a situation where banks don’t support continued inability of property owners to pay certainly capital repayments but possibly the interest too,” says Leech.

And it would save retail from a looming catastrophe.

Talks with the government are ongoing. BRC CEO Helen Dickinson cautiously welcomed the latest steps while adding: “We look forward to the finer details.” Leech remains hopeful that a furloughed space scheme will be forthcoming.

Yesterday, The Times reported that the Treasury was said to have agreed to look at the proposal.

If it doesn’t want to find it has paid to furlough staff for businesses that are in any event doomed, it may want to look closely.