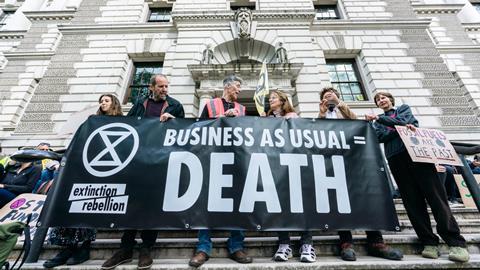 If you’re worried about Extinction Rebellion turning up on your doorstep or being subject to a boycott via Twitter, the chances are you haven’t put social purpose at the centre of your business. And it’s an increasing risk, says YouGov reputation and research director Oliver Rowe.

Whether it’s addressing climate change, gender diversity and inclusion, health and obesity, pay, ethics, or other causes and concerns, “corporate reputation has moved up the risk register so much,” he says. “The ability to defend your purpose, to improve it and grow it is absolutely critical.”

But how specific is the risk to grocery brands? Do they have to have a purpose? And what exactly is at stake if they don’t? To find out, we commissioned YouGov to poll shoppers and presented the findings at The Grocer Conference: How to have a purpose.

At first glance, it might seem ethics aren’t a priority. Just 6% of shoppers said ethics were the most important factor when they were buying groceries, suggesting brands would be better off focusing efforts on lowering price (45%) or improving product quality (30%).

But when asked more specifically about ethics, shoppers made stronger claims about their sustainable shopping habits. One quarter of shoppers said they would only buy products from grocery brands whose ethics and values they agreed with, while over a third said they made an effort to buy Fairtrade.

“Only a minority are driven by ethics,” says Rowe. “But many are actually using ethics as a deciding factor in whether to buy one product or another.”

Customers are sceptical about brand ethics

Grocery brands mustn’t just pay lip service to purpose, though. Because even if they claim they are acting ethically, there is a high likelihood shoppers won’t believe them.

One third of people said being ethical and sustainable was “just the latest fashion or fad for companies”, while only 37% disagreed with the statement. Just one in five agreed big companies were becoming more sustainable and ethical.

“Consumers are confused and a little unclear about corporate attemps to be ethical.” said Rowe. “I’m afraid for most businesses, their ethical messages are not landing with the public.”

Indeed, purpose won’t work as a selling point for every brand, Rob Metcalfe, chairman Richmond & Towers told delgates at the conference. ”You’ve got to do something really special to push yourself up the agenda of caring and trust amongst your consumer audience,” he added. “Purpose is great way of doing that but only if it’s genuine and real – you can’t manufacture it.”

But even if embracing purpose isn’t a fool proof way to make a fortune, shirking corporate responsibilities could have even worse consequences.

The environment, for example, is now an important considerations for the majority of shoppers. 70% of Brits say supermarket suppliers should focus on environmental issues in the coming years and when polled in February about the issues they care about, the environment came third after Brexit and health, moving up seven places in the chart since 2017 overtaking crime and the economy.

Shoppers don’t just expect brands to act responsibly on the environment. ”We’ve seen in our daily tracking work that poor corporate behaviours like profiteering, lying or poor treatment of employees can have a catastrophic impacts on the impression people have of a brand.”  says Rowe.

And shoppers are willing to act if they feel a brand is getting things wrong. Just look at Yorkshire Tea - which recently faced calls for a boycott after it was unknowingly affiliated to the Tory party.

According to the poll, a whopping 41% of consumers claim to have boycotted a grocery brand that has done, said or been implicated in something they don’t agree with or think is ethically wrong. Of those who said they’d taken part in a boycott, 26% say they stopped buying the brand on a permanent basis.

Which suggets it would be wise for all brands to have a long, hard think about their ethical direction. “It doesn’t matter if purpose is a fad, it’s the direction business is going,” suggested Deirdre Sorensen, partner at OC&C Strategy Consultants. “You can look at purpose from two angles: managing the downside or looking at the opportunity.”

Something to think about before Extinction Rebellion pops by for a visit.