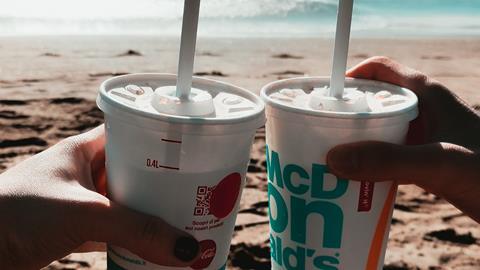 Last week Nando’s ran out of chicken. Pubs are warning they are running out of beer. Now, McDonald’s has stopped serving milkshakes. And not just milkshakes actually: bottled drinks are also temporarily unavailable across the fast food giant’s UK restaurants, according to reports in the national media today.

“Like most retailers, we are currently experiencing some supply chain issues, impacting the availability of a small number of products,” McDonald’s said. “Bottled drinks and milkshakes are temporarily unavailable in restaurants across England, Scotland and Wales.

“We apologise for any inconvenience, and thank our customers for their continued patience.”

While McDonald’s didn’t explicitly spell out why it’s experiencing supply chain issues, it’s fair to assume its much-loved milkshakes are the latest victim of the HGV driver shortage causing chaos across foodservice and retail supply chains.

Supermarkets have also suffered from empty shelves, with shoppers reporting shortages of products such as milk, crisps and bottled water.

And while our latest research suggests supermarket out of stock levels have fallen from their peak in mid-July, food and logistics experts warn the worst may still be ahead, with Brexit checks set to begin in October and Christmas looming.

Among the worst-hit sectors is the meat industry, which is suffering not just from the HGV driver shortage but its own labour crisis.

2 Sisters Food Group CEO Ronald Kers told The Grocer in June that labour shortages due to Brexit would result in tightened poultry supplies and could ultimately drive inflation.

These fears were confirmed in July, when 2 Sisters president Ranjit Singh said poultry shortages were “inevitable” and the BPC warned turkey supplies could fall by 20% this Christmas.

In a bid to plug shortages in the workforce, meat industry leaders are holding talks with government to discuss how the sector could employ more prisoners and ex-inmates, according to reports in The Guardian.

The Association of Independent Meat Suppliers, which says there are currently over 14,000 vacancies in the industry, said businesses would seek to employ more prisoners via the Release On Temporary Licence programme.

It’s a great idea. Not only would it help ease labour shortages, but it would offer prisoners and ex-inmates the chance to gain work experience that would help them transition back into society.

But it won’t be enough to solve the labour crisis facing the food sector, just as drafting in the army to drive lorries won’t solve the shortage of HGV drivers.

In the short term the government must act to give EU workers easier access to jobs in the UK. In the mid term the industry can then train more drivers. Even so, we’ll need to make those jobs more attractive and accessible to Brits.

And while milkshakes will no doubt be back on the menu soon, Brits should brace themsleves to pay more for their meals in the future.