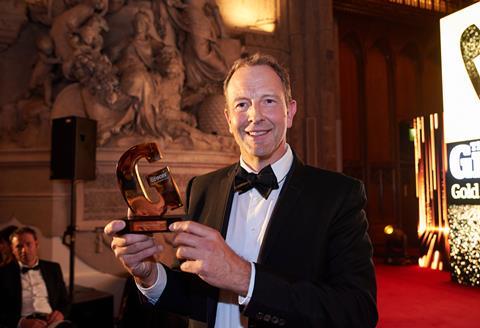 Tesco won the title of Britain’s Favourite Supermarket yet again at The Grocer Gold Awards this week.

The supermarket’s chief commercial officer Jason Tarry picked up the gong at the event, held at the Guildhall Great Hall in the City of London.

The award was the only one decided by a public vote, in the form of a survey of 7,004 households in partnership with NielsenIQ.

The survey revealed 66% of respondents would definitely go to Tesco for their groceries – 12 percentage points higher than its nearest rival in the big four.

Out of 11 key attributes that shoppers were asked to select their preference for (each of which was then weighted), Tesco was ranked first for eight, including for a ‘good overall shopping experience’ – the most important factor in store choice (see table below).

Online was another strength for Tesco, which was voted the best online retailer by 19% of respondents, up from 16% the year before. Asda was second on this measure with 10% of the vote, followed by Sainsbury’s with 7%.

Tesco also came out top for its promotions and offers, good use of technology, strong availability and providing shoppers with convenient ways to shop.

Tesco even won on ‘good environmental practices’ – a new attribute added to Nielsen’s methodology for this year. It reflects a growing priority for Tesco, which has upped its efforts to combat food waste, plastic packaging and carbon emissions. Earlier this year, CEO Ken Murphy set a target to grow sales of plant-based meat alternatives by 300% by 2025.

However, the discounters continued to win on price. They were also seen as the most improved retailers of the past year. Aldi was voted as making the most improvement by 16% of respondents, while Lidl wasn’t far behind with 12% of the vote. On this measure, Tesco trailed behind with 9%.