A 20% surge in promotional activity in the booze aisle reduced the overall cost of many festive tipples this Christmas.

And though the average saving stayed virtually static year on year, at 22.8% this Christmas compared with 22.6% in 2012, in some categories, prices actually fell, despite the continuing imposition of the duty escalator

Savings were particularly pronounced in the Champagne aisle, likely due to increasing pressure from fast-growing lower-priced alternatives such as prosecco. The average depth of deal rose 2.1 percentage points to 31.7%, and total deals grew from 76 to 100. 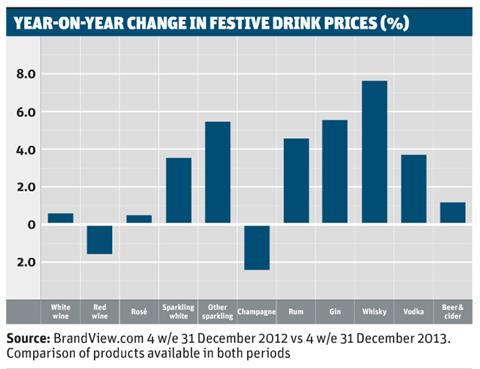 With deals slightly shallower year on year at 27.7% compared with 28.1% in 2012, the price of other still wines rose fractionally. White wine drinkers paid an average of 3p more per bottle, at £6.89, while rosé prices increased 2p per bottle to £5.89.

Average promotional savings also dipped slightly on sparkling wines, from 29.8% to 29.5%, which contributed to the price of a typical 75cl bottle rising from £6.91 to £7.19. Sparkling white wines were impacted slightly less, rising from £7.04 a bottle to £7.28.

With beer under more pressure than most drinks categories - volume sales of lager, for example, fell 2.4 % last year [Nielsen 52 w/e 18 October 2013] - it’s not surprising that retailers upped the number and depth of deals in the beer & cider aisle at Christmas. This helped to keep the average volume price of a litre of beer or cider virtually static year on year at £2.94 compared with £2.90 the previous Christmas.

Plaice prices in the UK have gone up 10.8% over the past month and are up 51.2% year on year because storms meant fewer boats could fish, thus reducing overall catch volumes. It’s a similar story for UK whiting, up 37.3% month on month and 44.2% year on year. 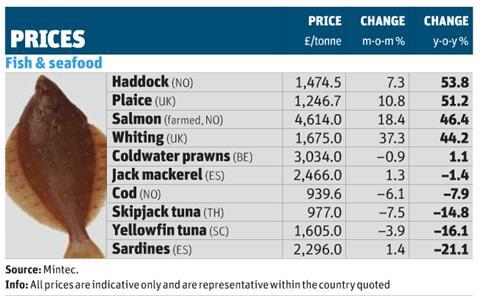 Bad weather in Norway has also taken its toll, with farmed salmon up 46.4% year on year because of supply problems caused by cold weather as well as increased demand over the holiday. Haddock prices in Norway continue to be driven up because of reduced quotas.

Tuna remains on a downward trend as a result of low demand from processors and good catches, particularly in the Western and Central Pacific. And sardines are down year on year with the return to more normal conditions following unusually high prices in 2013.