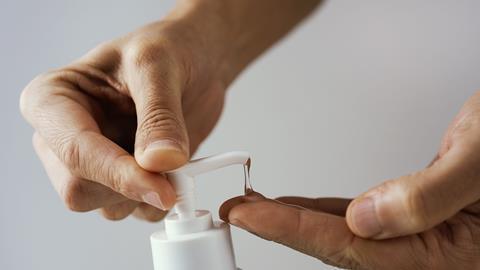 The pandemic has driven up demand for hand sanitiser. So how much are shoppers buying, how often do they use it, and how much will they pay?

1. Handwashing is seen as the most important protection against Covid-19 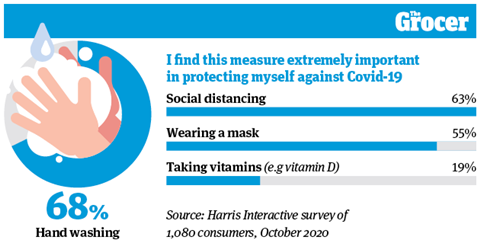 When the pandemic first hit, handwashing was the main public health message. Alongside social distancing, the nation was told to wash their hands in warm, soapy water for a minimum of 20 seconds to prevent the spread of Covid-19.

So it’s little wonder handwashing was deemed the most important form of protection in our Harris Interactive survey. Nearly 70% said handwashing was extremely important, while 63% deemed social distancing equally crucial. Masks were in third place with 55% of the vote.

This order of importance was fairly consistent across all groups. However, older respondents were more likely to rate all measures as more important than younger generations. In the 55-plus age group, 72% said handwashing was ‘extremely important’, for example. That compared with 51% of 18 to 24-year-olds – though this age group still rated handwashing as the most crucial measure.

Chemical company and hand sanitiser manufacturer Ineos says these findings stand to reason. “Washing hands is already embedded in the hygiene cycle and is an easy, absolute instruction to follow,” says Ian Smith, the company’s global head of sales.

2. Nearly a fifth own four or more bottles of hand sanitiser 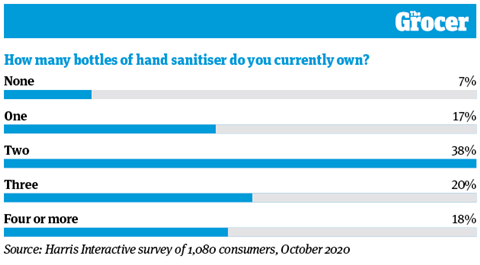 One bottle of hand sanitiser isn’t enough these days. The vast majority of consumers – 76% – own two bottles or more. And 18% go as far as owning four or more bottles. Only 7% haven’t bought into hand sanitisers at all.

There was a slight gender bias here. Among men, 33% owned three bottles of hand sanitiser or more. That compared with 42% of women. Londoners were also particularly likely to keep multiple bottles. In the capital, 20% owned four or more bottles, compared to just 12% in the south west.

Ineos’ Smith says the results show that “people see a relevance and role for hygiene in different spaces around the house, as well as out and about”.

3. Four in 10 sanitise their hands five times a day or more 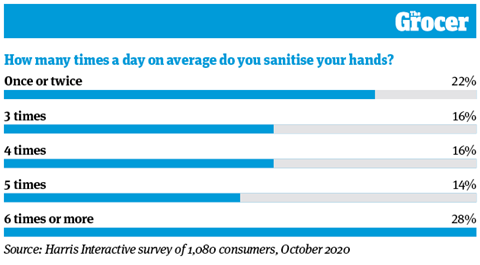 Interestingly, though older people placed most importance on handwashing, they were less frequent users of hand sanitiser. Around 10% of the 55-plus age group said they never used it, compared with just 1% of 18 to 24-year-olds. However, this might be down to younger people going out of the house more often.

In terms of regions, nearly half of respondents sanitised their hands five times or more in the north west and Wales. That compared with 37% in the south west.

4. Alcohol content is the most important factor when choosing a hand sanitiser 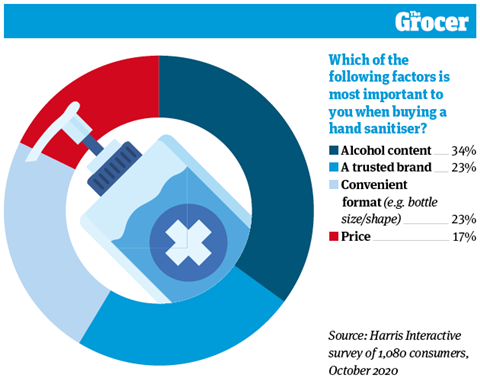 UK consumers have grasped the importance of a high alcohol content in hand sanitiser. Indeed, alcohol content was deemed the most important factor when choosing a product, ahead of a trusted brand or a convenient format.

Consumers appear willing to pay for quality when it comes to hand sanitiser. Only 17% rated price as the most important factor – half the number who deemed alcohol content the most crucial aspect.

However, these priorities switched among the youngest age group. Price was the most important factor for 25% of 18 to 24-year-olds, while alcohol content only had 24% of the vote.

5. The majority would not buy a sanitiser with less than 70% alcohol content 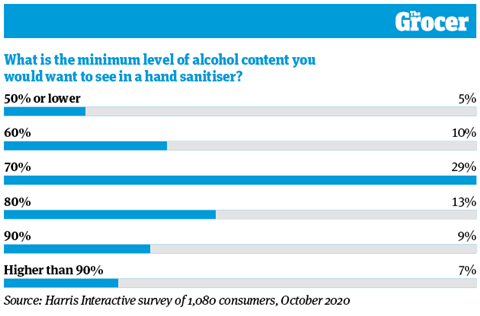 There was also some uncertainty, though. Overall, 28% said they weren’t sure on the optimal alcohol content. That rose to 37% of 55-plus consumers.

Alcohol content is “a critical factor”, says Smith. “Not just the percentage content, but the importance of purity also needs to be understood.”

6. Older consumers are more likely to take hand sanitiser whenever they go out 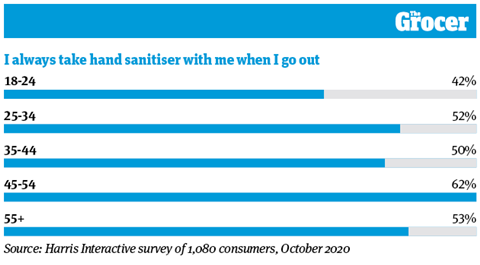 Hand sanitiser has quickly established itself as a handbag essential. Overall, 52% of consumers say they always take sanitiser with them when they go out, and 23% do so most of the time. Only 8% never take a bottle out with them.

There was an age split here, though. Among 18 to 24-year-olds, 42% say they always carry hand sanitiser with them when they go out. That figure rose significantly to 62% among 45 to 54-year-olds.

There were some slight regional differences too. In the north west and north east, 59% of respondents said they always had sanitiser with them. That compared with 45% of respondents in the south east.

7. More than eight in 10 have bought hand sanitiser since the pandemic began 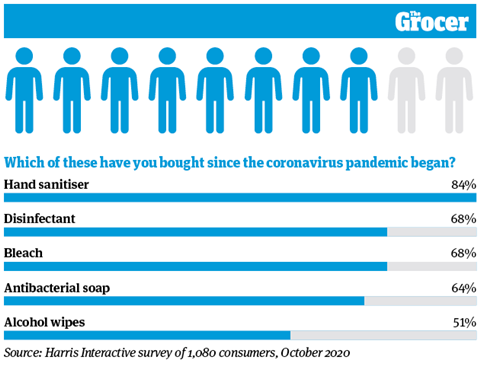 So it’s little wonder that sanitiser came out as the most widely bought hygiene item in our survey. Across the total sample, 84% said they had bought a bottle since the pandemic began. Disinfectant was the second most popular item, bought by 68% of consumers.

Hand sanitiser purchases were high across all demographics, but particularly among young people. Among 18 to 24-year-olds, 90% said they had made a purchase since the pandemic began. That compared with 81% of the 55-plus age group.

Younger people were also far more likely to buy antibacterial soap. It was purchased by 72% of 18 to 24-year-olds, compared to 52% of over-55s.

By contrast, older shoppers were more likely to buy bleach. Three-quarters of 45 to 54-year-olds made a pandemic purchase, compared with 54% of 18 to 24-year-olds.

Meanwhile, London was the area with the highest number of hand sanitiser purchases. There, 90% of consumers bought a bottle, compared with 75% in Yorkshire.

8. A quarter would pay £2 or more for a travel hand sanitiser 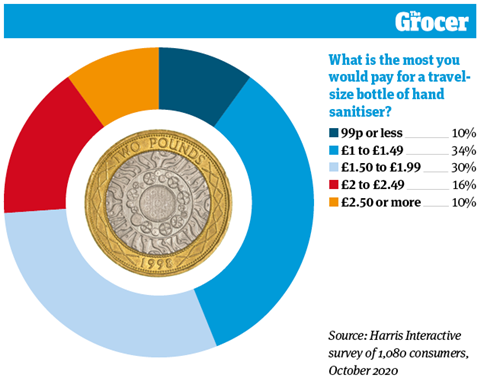 Typically, a travel-size bottle of hand sanitiser won’t set you back much more than £1.50 at high-street retailers. But as supplies dwindled in the initial throes of the pandemic, there were reports of online sellers charging prices upwards of £100.

For most shoppers, it seems £2 is a more sensible limit. Three quarters of consumers said they would pay up to £1.99 for a 50ml bottle. Meanwhile, 10% said they would be willing to pay £2.50 or more.

9. The majority think the government should educate shoppers on hygiene practices

Since the arrival of Covid-19, there have been numerous public health messages on good hygiene practices from the government, NHS and hygiene brands. But the public believes the ultimate responsibility lies with the government.

Two thirds of respondents said the government should be the one communicating effective methods of protection. That was closely followed by the NHS, cited by 62% of consumers.

Fewer than four in 10 thought brands and retailers were responsible for taking the lead on communication.

The onus on the government was particularly strong in Scotland, where 79% said it should play an education role.

10. Consumers are quietly confident about hand sanitiser staying in stock 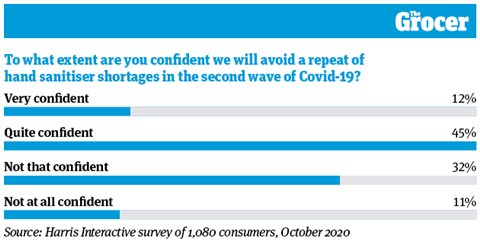 The second wave has well and truly hit home. That has provoked concerns over a second wave of the panic buying that saw shelves stripped bare in spring.

However, the majority of consumers were optimistic that hand sanitiser would remain readily available. Altogether, 57% said they were either very or quite confident that the UK would avoid shortages. And only 11% said they were not at all confident in stock levels.

The 35 to 44-year-old age group was particularly optimistic. Of these, 62% were confident supply would be maintained. That fell to 50% of 18 to 24-year-olds.