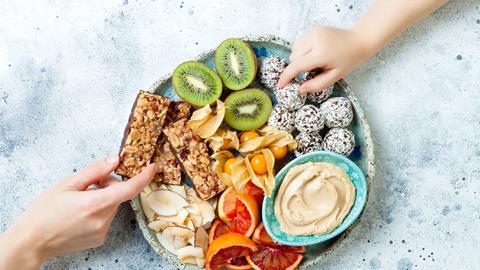 The coronavirus has driven interest in healthy snacking. But what are the deeper trends? Our research with Harris Interactive explores the relative habits of fitness freaks and couch potatoes, attitudes towards protein, concerns over sugar – and what the most popular snacks are

This research was commissioned by The Grocer and carried out by Harris Interactive independently from Jack Link’s and Peperami.

Here’s proof that a healthier lifestyle doesn’t equate to eating less. Our survey of over 2,000 Brits found that those with high fitness levels were most likely to snack regularly. Eight in 10 consumers with high fitness levels – classified as those who did moderate to vigorous exercise three times a week or more – said they snacked at least once a day. That compared with just two thirds of consumers who reported doing moderate to vigorous exercise less than once a month.

Fitness levels aren’t the only indicator of how often you eat, though. Younger consumers are also far more regular snackers than their older counterparts. Among the 25 to 34-year-old age group, 86% said they snacked at least daily, and 21% snacked as often as three times a day.

By contrast, 65% of the over-55 age group reported snacking at least once a day. Only 6% said they snacked three times a day, and 8% said they didn’t snack at all.

2. Fruit and chocolate are the most popular snacks 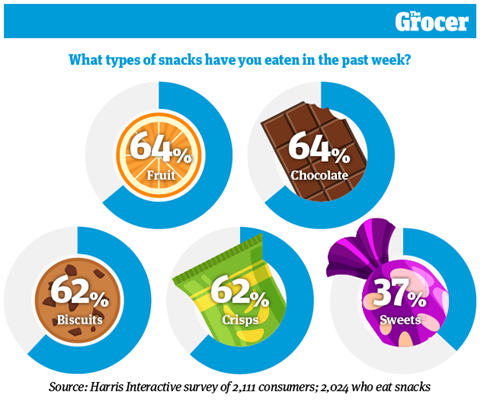 One is actively recommended by Public Health England, the other is calorific and downright tasty. Britain’s dual appetite for health and indulgence is reflected in its two most popular snacks: fruit and chocolate.

Granted, fruit does stand out somewhat among the top choices. Other popular snacks include the decidedly less healthy options of biscuits and crisps – which explains why so many healthy snacking efforts have centred on better-for-you versions of these treats.

There are demographic differences in snack choices, though. Women are more likely to choose fruit as a snack option. Indeed, 68% of female respondents said they had snacked on fruit in the past week, compared with 60% of men.

And chocolate emerged as a particularly popular snack among younger consumers. In the 25 to 34-year-old age group, 71% said they had eaten chocolate in the past week. That fell to just 55% among the over-55s. In this age group, biscuits were the more popular option, enjoyed by 61% of respondents in the week leading up to the survey.

3. Taste is king when it comes to snacking 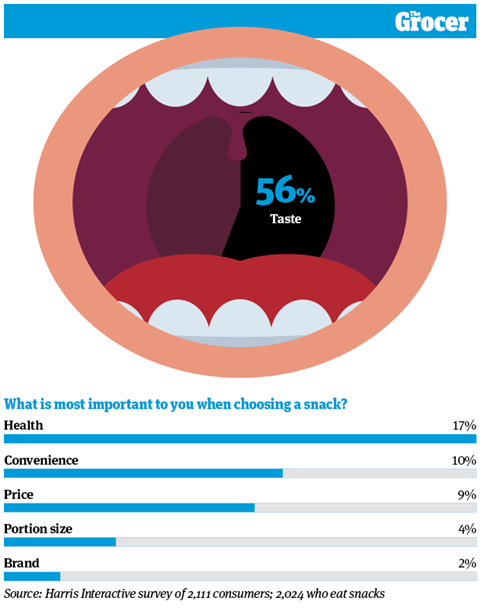 Taste is king in all areas of grocery, and snacking is no different. More than half of respondents named taste as the most important factor when choosing a snack, while just 17% saw health as their top priority.

That’s even true among the most health-conscious consumers. A fifth of consumers with high fitness levels said health credentials were the most important factor in a snack. But taste still won out among this demographic, with 53% of the vote.

In consumers who are less fitness-concerned, taste takes on an even higher importance. Only 10% of consumers with low fitness levels named health as a priority, while 62% said taste outweighed all other attributes.

This emphasis on taste played out across all demographics. It was slightly more important among older consumers – 62% of over-55s named it as a priority, compared with 50% of 25 to 34-year-olds – but all ages put it well ahead of health.

Meat snack manufacturer Jack Link’s stresses that successful snacks appeal to tastebuds first and foremost. “Taste is the most important criteria that the snack must deliver on,” says Laura Trivulzio, marketing director at Peperami and Jack Link’s. “It’s key that brands ensure this is at the forefront of any new product development.”

4. Healthy snacking is most important to younger consumers 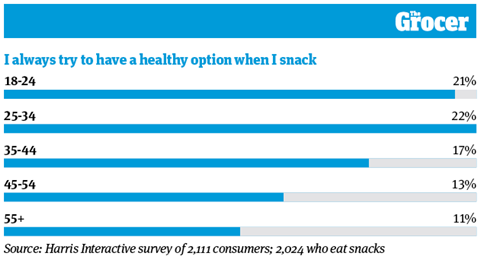 Younger consumers are more likely to snack regularly and exercise regularly. So it’s no surprise that this fitness-conscious group is particularly keen on the concept of healthy snacking.

There are some more surprising demographic differences here too. See the variation between the regions. In London, 21% of consumers said they always went for healthy snacks. That figure fell to 8% in Wales.

5. Most customers are satisfied with the number of healthy snacks on the market…

Healthy snacking is one of the most innovative areas of grocery. Suppliers are continually experimenting with ingredients such as pulses, nuts and oats to find the perfect healthy snack.

Encouragingly, the public has taken note. Nearly a third of respondents felt there were lots of healthy snacks on the market, and half agreed there were a ‘fair amount’ of options.

There was only a slight difference between the regions. In the south west, 38% agreed there were lots of healthy snacks, compared with 28% in the south east.

6. …but they don’t always deliver on taste 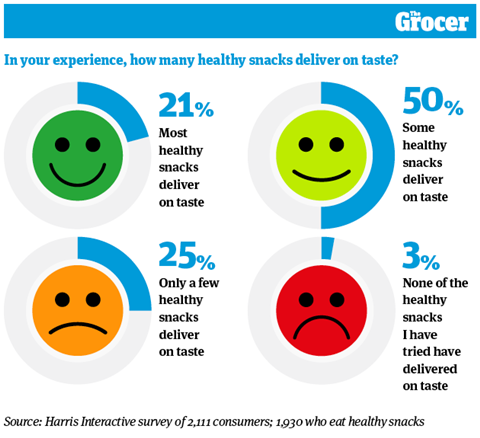 Given the overriding importance of taste, these figures are critical to the success of the healthy snacking proposition. So it could make somewhat dispiriting reading. A fifth of consumers believe most healthy snacks deliver on taste, but a larger number believe very few make the grade. The vast proportion of consumers lie somewhere in between.

A similar picture emerged in London, which has a high proportion of engaged consumers. There, 25% believed most healthy snacks made the grade on taste. Only 17% of respondents in the north west agreed.

Age groups were the anomaly here. Despite younger consumers buying into healthy snacks more regularly, they weren’t much more positive about their taste credentials. Among the 25 to 34-year-old age group, 21% agreed that most snacks met their demands on taste. That figure was actually slightly higher among the over-55s at 22%.

7. The afternoon is the most popular time to eat a healthy snack

Consumers are most partial to a healthy snack later on in the day, our survey found. A third of consumers named the afternoon as the prime time for healthy snacking – a pattern that was replicated across all ages and locations. Only a fifth of consumers said they were most likely to eat a healthy snack in the morning.

However, that isn’t the full picture. These figures are influenced by the high amount of snacking that takes place in the afternoon, and don’t look at the proportion of occasions that are healthy.

Kantar data shows that when consumers do snack in the morning, they tend to lean towards more virtuous options. Indeed, 41% of occasions before noon are classed as healthy [Kantar 52 w/e 29 December, 2019]. That compares with 33% of occasions in the afternoon. “The later the time, the less important health is,” says Kantar.

8. Protein is more important to consumers with high fitness levels 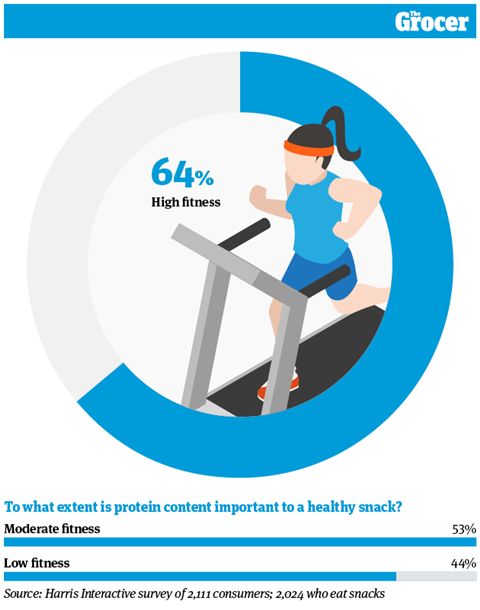 Plus, there remains a slight gender bias in engagement with protein messaging. While 60% of men agreed that protein content was important to them, 55% of women said the same.

So it’s true that protein continues to hold the greatest appeal among its core demographic of male gym-goers. But Laura Trivulzio of Peperami and Jack Link’s points out that outside these core groups, engagement remains relatively high. Not long ago, interest in protein would have been next to zero outside of the gym crowd. Now, 44% of consumers who exercise less than once a month rate protein as an important factor when choosing a snack.

“We’ve seen protein snacking evolve from niche muscle building to having a more mainstream focus, with many incorporating it into an everyday diet for extra energy and vitality,” says Trivulzio.

9. Low sugar is the primary requirement for a healthy snack 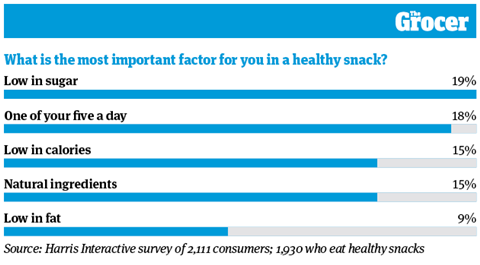 What constitutes healthy? As these survey results show, health means different things to different people. While one person may be concerned with getting their 5 a day, another may be busy counting calories.

But these results do show how perceptions have changed over time. Back in the 1990s, a low fat content was considered the prime indicator of health. Today, only 9% of respondents consider that the most important factor in a healthy snack. Instead, the public health messaging around sugar seems to have cut through, as low in sugar topped the list of healthy attributes.

Older consumers were particularly concerned about sugar content. Nearly a quarter of the 55+ age group cited low sugar content as the most important factor, compared to 12% of 18 to 24-year-olds. Meanwhile, younger consumers were more interested in getting one of their 5 a day: 23% of 18 to 24-year-olds rated this the most important factor.

10. Nuts are the most popular form of high-protein snack 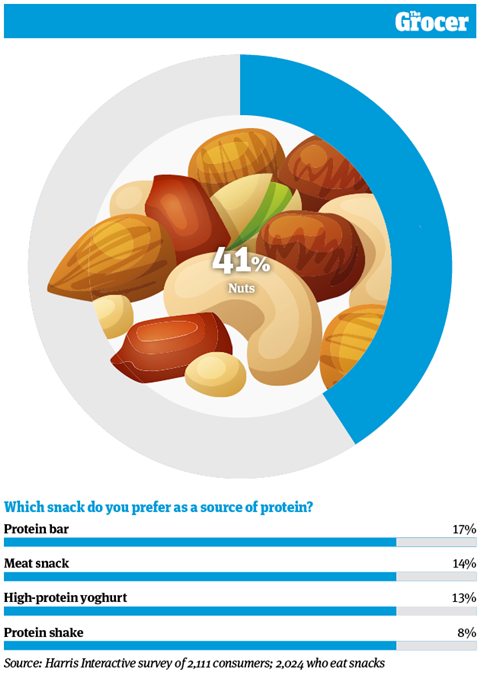 The protein shake has fallen out of favour. Once a must-have for exercise buffs, the shake is today favoured by only 8% of consumers as a source of protein. That rises to just 9% of respondents with high fitness levels.

Instead, protein sources that are viewed as more natural have taken the top spot. More than four in 10 consumers say nuts are their preferred source of protein. And meat snacks are hot on the heels of protein bars, favoured by 14% of respondents.

The popularity of these snacks varies by age. Older consumers, for example, are more likely to turn to nuts as a source of protein. While 53% of the 55+ age group named nuts as their top protein source, only 20% of the 18 to 24-year-old age group said the same.

Whatever form it takes, Trivulzio says the concept of natural protein is gaining ground across all ages. “Natural protein has a broader, everyday appeal connected to healthier eating,” she says. “Meat snacking as a result has flourished, growing 20% in the last year alone.”